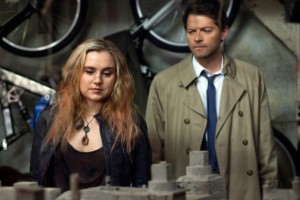 Thank God. It’s been too long since we has the last new episode of Supernatural.  “Goodbye Stranger” looks to be a spectacular addition to the greatest hits of Supernatural with the return of Castiel (Misha Collins), Crowley (Mark Sheppard and confused demon Meg (Rachel Miner), who it appears has been tortured since we last saw her by dear Mr. Crowley.

Castiel still isn’t playing it straight with Sam and Dean, at first lying to them about what the demons are after these days – Lucifer’s crypts. That could do a number on Sam’s head if he were still in the wrong frame of mind. Nonetheless, interrogating demons never goes as expected and that’s how they discover what Meg has been up to.

In this “cryptic” clip, Cas is playing bad angel hunter again, Meg gets rescued and Crowley is doing what he does best – providing plenty of snark, demon style.

The bigger picture becomes much clearer after viewing this next clip, where Cas is lying to the Winchester Brothers, at the command of Naomi, to keep them from knowing what they need to adequately prepare to search for Lucifer’s crypts. I’m still eager for the day we learn who in the hell (and she must might be from Hell) Naomi really is. Until then, Cas is her puppet.

If the entire episode is as full of good quotes as can be found in the two clips shown here, my promise is a dedicated “Goodbye Stranger” quote post because, well, it’s deserving.

From the following clip alone we get these goodies: From Dean, “Well, he puts the ass in Cas, huh, ” and from Castiel, when Sam and Dean think they’re flying below his radar, “You know, I can hear you both. I am a celestial being.” Watch, and enjoy.

Let’s just expect the quotes to keep coming. Meet back here shortly after the show airs for the quote post. After eight seasons, it’s getting easier to spot the well-done quotable moments in Supernatural!