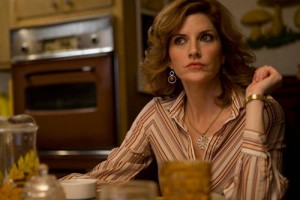 According to TVLine, Melinda McGraw has joined the cast of Scandal as Deborah Doyle, Hollis’ ambitious New Yorker wife. Her first episode won’t air until April and there’s no word yet about how she’ll fit into the Scandal-verse, though anyone willingly married to Hollis has to have at least a little bit of evil inside them fighting to get out. Although the temptation is to look at her ambition and think of the marriage as an arrangement of convenience, Deborah’s not an innocent here; Hollis is  not shy nor is he that subtle about hiding who he truly is.

We haven’t seen him in a few episodes and while it may seem like time for Olivia and company to breathe a little easier, a secretive Hollis is arguably the most dangerous Hollis. He’s planning something and that cannot be good for anyone on Scandal, particularly Olivia; the two already don’t get along and the D.C. fixer has her hands full with Huck’s water-boarding PTSD, a new man in her life (who’s not as he seems), and the discovery of a mole in the CIA who tried to frame David Rosen for the death of a young woman. She might have the heart of a lion and a strong team around her, but Olivia is in danger in more ways than one. In addition to the threat of Hollis, she has to be conscious of not taking care of herself and letting her mind dull even slightly, which could give those who want to do wrong by her just enough of an opening to strike. Can Olivia find the right balance needed to save her own life?

In addition to her role as Don Draper’s season two mistress Bobbie Barrett on Mad Men, McGraw has appeared on the likes of Ben and Kate, Men of a Certain Age, Harry’s Law, The West Wing, and Hank. Guest stars on this season of Scandal have included Stephen Collins, Eric Mabius, Brenda Strong, and Lisa Edelstein.

Scandal airs Thursdays at 10:00 on ABC. The show returns from hiatus on March 21st.

What are you expecting from the final seven episodes of this season of Scandal? How important will Deborah be once she makes her debut? Are Hollis’ days numbered?