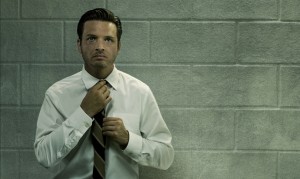 Sundance has released a trailer for Rectify, its first attempt at a wholly owned original scripted series. From the producers of Breaking Bad, the show finds death row inmate Daniel Holden released after 19 years due to DNA evidence. However, the evidence doesn’t exonerate him in the court of public opinion and he has difficulty assimilating into modern society after nearly two decades of isolation. Prison might have done a psychological number on him, but Daniel understood that world; he knew what to expect and how to act, both things that he can’t quite catch onto regarding 2013 life.

In the time that Daniel was away, society has drastically changed, with innumerable technological and social advancements that will take him time to get used to. He not only has to adapt to the way people in the community see him now, especially with the victim’s family taking to the media, he has to figure out how to live in a world totally foreign to him. What was once a place he could call home is now a prison on its own right; with his record and reputation, Daniel won’t simply be able to dive back into the working world. Normalcy won’t be an easy thing to come by, but if he could make it through nearly two decades of living in a small cell, he can do just about anything.

Now, if only the people in the community would let him move on with his life…

The series premiere of Rectify airs Monday, April 22nd at 10:00 on Sundance Channel. The first season of the show will feature six episodes.

Will you watch Rectify? Do you like that more networks are getting into scripted television? How long do you think a show like this could last?