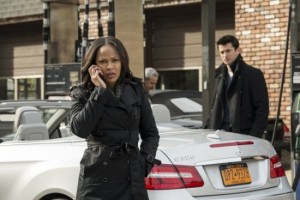 To the Bowers family, Joanna is a dear friend of Vivian’s past who needed a fresh start after leaving her abusive husband. Whether it be out of perceived need to do “what Vivian would have wanted” or a desire to make their spacious mansion a little less empty, they invited her to live with them, only for the detective to get too close to the family secrets. Sofia may have kicked Joanna out of the house at the end of last week’s episode of Deception, but there’s still a way for her to continue the investigation into Vivian’s death through her connection with Julian. But what would happen if he found out the real reason she came back to town?

On tonight’s episode of Deception, Joanna follows a lead that ends in a gunfight at a local convenience store. Nobody gets injured, but her cover is potentially punctured when the clerk and a journalist both peg her as being a cop. With Vivian’s murder far from being solved, Joanna can’t afford to have her cover story blown, not when she’ll be staying with the two members of the Bowers family she’s closest to. There’s a chance that she could make some real headway into closing the case and finding the justice that has thus far eluded her best friend. That is, if she can keep everyone who knows of her as a cop quiet long enough for more Bowers secrets to come spilling from Julian’s mouth.

Elsewhere on Deception, Edward finds out disturbing news on Lyritrol, Haverstock reveals his true identity to Mia, and there’s a physical fight at a PR event for Bowers Pharmaceutical that results in a big career move for one family member.

Deception airs tonight at 10:00 on NBC. You can check out spoilers for the next two episodes here.

Will Joanna be able to keep her true identity hidden from the Bowers family? How will Mia react to finding out that Haverstock is her birth father? Is Lyritrol going to make it onto shelves?