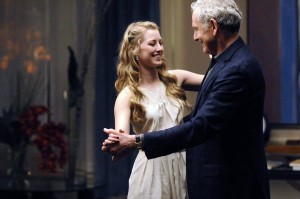 In the world of Deception, nothing can stay hidden forever. Every member of the Bowers family attempts to put on the facade of having it all together, of representing their family name in a way that is respectable and keeps the luster around the Bowers empire shining brightly. However, slowly but surely, we’ve been exposed to the dynamics in the family that don’t always get out there and that Joanna, as close as she was to Vivian, wasn’t aware existed. Edward is a violent man haunted by a past he wants to erase, Julian is an arrogant playboy who Joanna finds herself both drawn to and repulsed by, and Robert’s marriage to Sophia is nothing more than smoke and mirrors meant to woo the press.

But what about Mia?

On the next episode of Deception, the identity of Mia’s real mother has become front page news, placing her in harm’s way as a result. While the family’s reputation will surely take a noticeable hit from the unfavorable press coverage, Mia has now been exposed to the outside world as being the daughter of infamous party girl Vivian Bowers, once thought to be her wild child sister. Vivian’s killer might be tempted enough by the idea of taking Mia out, too, that they could come out of hiding long enough to finish the job, potentially leaving Joanna with enough room to catch the culprit once and for all. Will Mia be willing to be the bait and to withstand a flurry of bad press for the opportunity to avenge her biological mother?

Elsewhere on Deception, Julian tries to use a connection to a former lover to help get his cancer drug on the market, while Will and Joanna put their romantic relationship on the back burner to focus on solving the Bowers murder.

Is Mia in danger now that the public at-large knows that she’s Vivian’s child? Can Joanna use the target that will be on Mia’s back to lure Vivian’s killer close enough to catch? Will Julian get the cancer drug on the market through his connection?