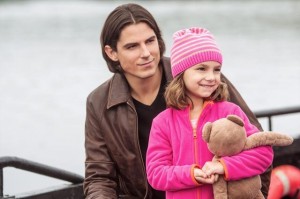 “Christmas with Holly” comes with everything you need for a holiday classic. Family, tragic loss, new beginnings, romance and a lot of heart. As with every Hallmark Hall of Fame production, it will also come with a good dose of tears. Mind you, I haven’t even seen the commercials, so I’d be well prepared with tissues at hand!

Starring twins Josie & Lucy Gallina (Emily Schroeder, Boardwalk Empire) as Holly, the movie is set around a little girl (the Gallina twins) who recently lost her mother. She’s been taken in by her uncle Mark (Sean Faris, Vampire Diaries), who moves back to his family home on a quaint island and into the old family home with his two brothers, Scott and Alex. Growing up comes quick for these adults when they are made responsible for a six-year-old, and they have their setbacks and triumphs. 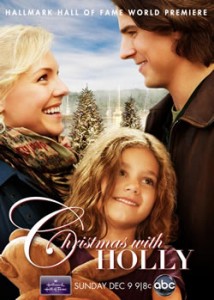 “Christmas with Holly” is a lesson about love and sacrifice, and what changes you’re willing to make to your settled ways when tragedy strikes and your family comes calling on you for support. In that regard, it hit all the right notes. Any squabbling done between the siblings was done out of trying and failing, not from an unwillingness to put their best feet forward. As you watch, you can rest assured you will be seeing the families for what they should be, not what they usually are.

That’s not to say there isn’t some evil lurking nearby. Mark didn’t necessarily have the best choice in women before becoming the caretaker of Holly, but he also meets another newcomer to the island, Maggie (Eloise Mumford, The River) who has come start her dream of opening a toy store on the island. As soon as Mark, Holly and Maggie meet, you can see the ending of the movie, but that doesn’t stop the enjoyment of the ride to finish. With silly dogs, tales of fairies and river dancing, “Christmas with Holly” will steal your heart.