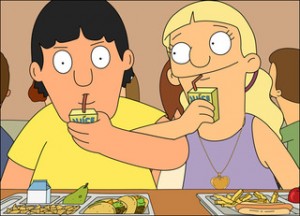 Earlier this season, Gene experienced his first feelings for a woman when he fell for Marilyn, a ventriloquist’s puppet whose operator tried to scam to little boy out of money. While that affair came to a close almost as soon as it began, it foreshadowed an actual dry-land relationship, as the Belcher boy will be getting a girlfriend on the next episode of Bob’s Burgers, S03E08 “The Unbearable Like-Likeness of Gene.”

However, it’s not exactly his choice and nobody seems to be that into the idea. The girlfriend, named Courtney (and voiced by David Wain), annoys the entire Belcher family, including Gene, and all but forced him to be with her by cornering him at his locker. Although Gene would like to break up with her, he finds out that her father (voiced by John Michael Higgins) is a jingle writer and could help him launch a music career, which complicates things. Is it worth putting up with Courtney for the opportunity that a friendship/partnership with her father could provide?

Elsewhere on Bob’s Burgers, Linda’s gotten fed up with her body and has decided to go on a diet consisting of only fruit and vegetable skins. Her friend Gretchen went on the same diet and recently lost 15 pounds, earning many a compliment on her first visit to the restaurant since the weight fell off. In order to win back the attention of Bob and make herself feel more attractive in the process, Linda will dine on cantaloupe rinds and kiwi fuzz, but how long will she be able to keep it up and, really, is it worth it?

Will Gene stay with Courtney in order to further his music career? Do you like Bob’s Burgers exploring Gene’s interest in girls (and manatee puppets) this season? Should Linda be going on such a crash diet?