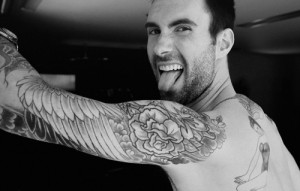 Now that both The Voice and The X Factor are entering the live-round portion of their competition, it’s time for the guest performances to begin. Up first for The Voice are Maroon 5, who will be debuting their new single “Daylight” on a special Thursday episode; due to the election, The Voice will be airing Monday, Wednesday, and Thursday this week. The band, fronted by Voice judge (and American Horror Story actor) Adam Levine, are currently #1 on the Hot 100 with “One More Night”, their second single from their fourth studio album Overexposed. In addition to Maroon 5, season two winner Jermaine Paul will be returning to the stage of his coronation to perform his debut single “I Believe In This Life”.

The Thursday episode of The Voice will bring the first eliminations from the Top 12, as two artists from each team will be sent home during the Live Playoff Results Show.

Meanwhile over at The X Factor, One Direction will be making an appearance to perform two songs (“Live While We’re Young” and “Little Things”) from their upcoming album Up All Night on Thursday, November 8th. The boy band were formed during a season of Teh X Factor UK and eventually placed third in the competition, behind Rebecca Ferguson and Matt Cardle. The quintet recently notched the biggest opening week single sales by a non-US act, moving 341,000 copies of “Live While We’re Young” in September.

The episode that One Direction performs will be the first results show for the top 12, with one of the finalists being eliminated from the competition by the four judges.

Which performance are you most looking forward to seeing? What musical acts would you like to see hit the stage on The Voice and/or The X Factor this season? Who do you think will win either competition and do you think either have a frontrunner at the moment?