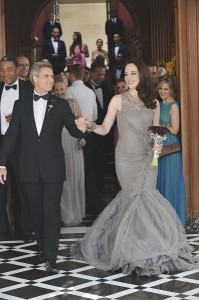 It’s not quite gelled with me why in the hell Victoria and Conrad would want to remarry, even given their “peculiar” circumstances. Even the worst court of law could see through their desire not to testify against each other. Isn’t there some law somewhere that would prohibit people marrying unders such fraudulent reasons?

So, Victoria planted Conrad’s cufflink at Murphy’s silver bullet? Why do people always want to wear jewelry that’s been stolen for nefarious purposes but has laid otherwise untouched for years? Talk about a dead giveaway. It made me wonder how long until Mason gets in the way and finds himself in the path of hurricane Victoria. He just doesn’t seem like a character meant for a long-term presence. You had to love Victoria pulling out the David Clarke card in jail against Conrad. She’s just clean as a whistle.

The idea that Victoria thought it was Kara, hiding in plain sight inside Grayson Manor, who framed Conrad was spectacular. The look on Victoria’s face was worth every barb she traded with Conrad all day long. Of course, we know Murphy was shot by Aiden, but who DID plant him in the mobile home?

There are so many people trying to take down the newlyweds that it’s downright amazing they’re still bouncing around on top of the pyramid. How is that even possible?  Their own children are plotting against them, Daniel with the help of Aiden, who studied classic revenge tactics with Emily, who is truly her mother’s daughter, although her mother thinks the real Emily is Amanda. At this rate, I have to wonder if David Clarke isn’t out there alive and kicking under a pseudonym himself, perhaps having undergone reconstructive surgery a few times, but hanging as a prison guard (why not?) just biding his time for the perfect moment to return. By the time he does return, he’ll have his face back. Maybe that will be the series finale and I’m far ahead of myself. Playtime is fun!

The creepy, borderline incestous closeness of the Hampton lifestyle bothers me. I get that Ashley wanted to jump on the Grayson train, because with all their success and happiness, who wouldn’t? But really, she was friends with Emily and I still can’t get over seeing Ashley and Daniel in various states of undress together. Daniel still strips Emily with his eyes every time he sees her. Doesn’t that bug Ashley? What kind of person would so complacently accept being second best? Aiden thinks she may be more than just an easy mark. I’d love to discover there is more to her than the simple personal assistant that bounces around the Grayson family.

Seeing Conrad sitting in jail with his tux was so sad, but I was very happy to see his business pal Helen didn’t wear leather gear and an odd shrug to visit. An outfit says a lot about the power of a woman, and if Helen thinks she looks the part via her choice of attire, she might do well to reevaluate. It’s the little things I notice.

The last reveal of how Emily pulled off the resurrection and “murder” of Gordon Murphy was quite satisfying. That she’s willing to toss anybody under the bus is always a treat. I wasn’t, however, expecting the yarn strings to belong to Mason connecting the dots from Emily to Amanda. It seems all the surgery dates won’t mean much if he keeps digging. If he continues to shovel away, he might just prove to be that short-term character I mentioned above.

We know one thing for sure, it will be awfully fun to figure it out!