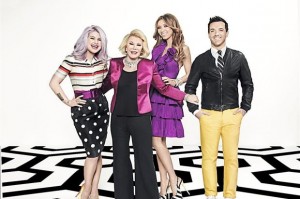 E! has announced that Fashion Police is set to return in 2015 without host Joan Rivers, who passed away following surgical complications on September 4th.

“We are deeply saddened by the loss of Joan Rivers and, for the last two weeks, have turned our attention to honoring her memory on all of our platforms.  We have also thought long and hard about what Joan would have wanted as it pertains to the future of Fashion Police. We decided, with Melissa Rivers’ blessing, that Joan would have wanted the franchise to continue. Fashion Police will return in 2015 commencing with Golden Globes coverage on Monday, January 12. No further details will be announced at this time.”

Premiering in September 2010, Fashion Police brought Rivers together with Kelly Osbourne, Giuliana Rancic, and George Kotsiopoulos together to talk anything and everything fashion, as they analyzed red carpet looks and played various fashion-inspired games. Though Rivers’ daughter Melissa, an executive producer for Fashion Police, has stepped in front of the camera before, it seems likely that the show will either continue on with the three remaining co-hosts or look for a bigger name to act as the “moderator” of sorts.

Today, E! has been hosting a marathon of Fashion Police in honor of Rivers, with a 90-minute tribute special set for 8:00.

Do you think Fashion Police should continue without Joan Rivers? If so, who do you think should be the new fourth panelist? If not, would you be more okay with semi-regular specials vs. a weekly series?