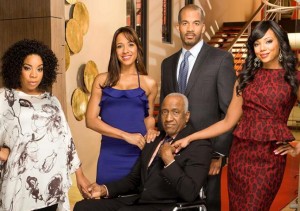 Rosie has been working at compartmentalizing her feelings for Spence and moving on with her life to great effect. Although she still harbors sentiment toward Spence, her talk with Kenneth made her realize that she can’t wait around forever for him, nor can she spend the rest of her life punishing herself for having the affair in the first place. In order to grow and prosper as a person, Rosie needs to open herself up to new experiences and she’s doing just that by agreeing to go on a date with Reggie; however, we’ve already seen that Reggie is using his connection to Rosie to further his own financial gain and on the next episode of Devious Maids, he becomes an even shadier individual.

That’s because he learns about Rosie’s history with Spence and becomes jealous, even though there’s no indication that either party wants to reconcile or that either party is even in contact with the other. It’s likely that this sudden rush of jealousy is a way to further isolate Rosie and prey on her goodness; she and Reggie simply haven’t known each other long enough for him to have a leg to stand on when it comes to actual jealousy. Since he’s already shown that he’s willing to manipulate Rosie to get what he wants out of life, it’s not inconceivable that he’s doing his best to keep her from reaching out to third parties and to keep her mouth shut regarding what’s going on in the Miller house. The best way to do that? Cut what could be her strongest non-familial tie and force her to lean on him instead.

Elsewhere on Devious Maids, Marisol works to convince Nicholas to get rid of Opal, while Carmen tries to let Ty down easy, Zoila gets closer to Javier, Adrian becomes suspicious of Evelyn’s relationship with Tony, and Remi attempts to reconcile with Valentina.

Do you think Reggie has a right to be jealous of Rosie’s history with Spence? Will Marisol be successful in getting rid of Opal, assuming she uses the affair card? When will the other shoe drop regarding Javier’s interest in Zoila?