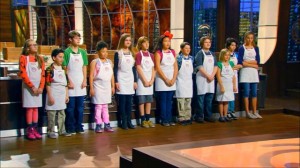 FOX has announced that reality-competition series MasterChef Junior has been renewed for a third season before its second season could air this coming fall. In its first season, the Gordon Ramsay-hosted cooking competition, which pits aspiring chefs ages 8-13 against one another, averaged 5.1 million total viewers and ranked No. 1 in its time period among Adults 18-49, Adults 18-34, Women 18-49/18-34, Men 18-49/18-34, and Teens.

“MasterChef Junior has proven itself to be the little show with a big bite – so big, we’ve picked it up for a third season,” said Simon Andreae, Executive Vice President, Alternative Entertainment, Fox Broadcasting Company. “It’s incredible to see how unbelievably creative and skilled kids can be in the kitchen – some before they’ve even learned how to spellwhat they’re cooking! We can’t wait to meet the talent that our judges discover in the next two cycles.”

It’s a surprising vote of confidence for the competition series, which performed better than the network could have expected while not gathering as much buzz as some of its lower-rated fare. Still, it further solidifies the network’s relationship with Ramsay, who is currently responsible for five series (MasterChef Junior, MasterChef, Hell’s Kitchen, Kitchen Nightmares, Hotel Hell) on FOX, and gives them a strong piece at a time when the rest of their lineup is imploding. With American Idol severely down, New Girl losing 50% of the audience it had in September, Brooklyn Nine-Nine softening following Super Bowl exposure, Rake being DOA, and The Following edging toward the bubble, among many other troubling developments, FOX needs shows like MasterChef Junior to take up scheduling space and allow them to focus their efforts elsewhere. With the positive word of mouth that the first season received, it’s possible that season two will prove to be an even sturdier workhorse and breathe some life into Fridays.

Do you think FOX made the right decision in already renewing MasterChef Junior for a third season? Will the show become a Friday night staple for the network as they look to rebuild elsewhere? Exactly how many more Gordon Ramsay shows will air on FOX in our lifetime?