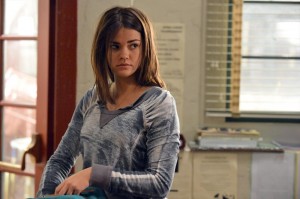 Since she moved into her new home and began going to her new school, Callie has yet to connect with someone outside the family. Talya’s been “nice” to her all the while attempting to ward her off from being close to Brandon, the only person she’s become comfortable with since the change of scenery, and really, that’s about it. Was it, I should say, as Callie might have stumbled upon someone in Timothy’s class in Wyatt, a bad boy who she locked eyes with one day and suddenly became intrigued by. While it’s a good thing for her to spread her wings at Anchor Beach and try to become her own person away from the family, there are going to be some people on The Fosters who won’t approve of the company she’s keeping and try to dissuade her from continuing to see him. But will Callie listen and do away with what could be a promising friendship/relationship, all to please someone else? Or is she fed up enough with Talya and being fairly lonely to do something for herself, everyone else be damned?

Listed below are the dates, titles, and descriptions of the next two episodes of The Fosters.

Monday, June 24th – “Quinceanara”
Lena wants to throw Mariana the perfect Quinces party, while Stef balks at the cost of the event. Prompted by her moms, Mariana invites Callie to be in her court and Callie awkwardly accepts. Meanwhile, Lexi tells Jesus she doesn’t want to sneak around behind Mariana’s back anymore, but they’re finding it hard to keep their hands off one another. Stef notices tension between Brandon and Talya over Callie and reminds Brandon that it’s against the rules for foster siblings to have romantic relationships. Brandon brushes her off, but when Talya drops her friendly act and warns Callie against getting too close to her boyfriend, it might be the last straw for him. Lena’s mother Dana (played by Lorraine Toussaint) arrives in town for the Quinceañera and the friction between mother and daughter is palpable. Mariana stumbles upon some news that could completely ruin her special day.

Monday, July 1st – “The Morning After”
When things between Jesus and Lexi get hot and heavy, they are forced to face the possible consequences of their actions. Meanwhile, Callie gets closer to Wyatt but Brandon has serious reservations about Callie dating a “bad boy.” Stef and Lena learn that two of their close friends, Kelly and Jenna, are having major relationship trouble and it causes them to look at the lack of romance in their own lives. Kelly and Jenna’s hip and educated son, Garret (played by real life slam poet Noah St. John), catches Mariana’s eye and she becomes desperate to fit in with his cool, edgy crowd. Jude is bullied at school for being different.

Do you think that Callie’s growing relationship with Wyatt will make Brandon realize where his feelings for her stand? Are we looking at a pregnancy scare for Jesus and Lexi? Will Lena and Stef be able to fit a little romance into their increasingly busy schedules?