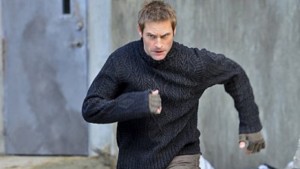 CBS has released behind the scenes trailers for six of its eight new series for next season. While Cam Gigandet’s legal drama Reckless and ensemble comedy Friends with Better Lives aren’t included, shows such as Josh Holloway’s Intelligence and Robin Williams/Sarah Michelle Gellar comedy The Crazy Ones have videos that intersperse clips with interviews about their respective series. These are not the same trailers as the ones that played during the CBS upfront presentation yesterday, but they’re the type of clip that CBS releases on a yearly basis.

Which new show looks the most promising? The most disappointing? What will you be watching next season on CBS?

The Crazy Ones
Who’s in it: Robin Williams, Sarah Michelle Gellar, James Wolk, Hamish Linklater, and Amanda Setton
What’s it about: An eccentric advertising genius who works with his Type-A daughter

Hostages
Who’s in it: Toni Collette, Dylan McDermott, Tate Donovan, Billy Brown, and Quinn Shephard
What’s it about: A surgeon ordered to assassinate the President.

Intelligence
Who’s in it: Josh Holloway, Michael Rady, Meghan Ory, Marg Helgenberger, and James Martinez
What’s it about: A high-tech intelligence operative enhanced with a super-computer microchip in his brain.

The Millers
Who’s in it: Will Arnett, Margo Martindale, Beau Bridges, J.B. Smoove, and Mary Elizabeth Ellis
What’s it about: A divorced man whose parents are going through marital problems of their own

Mom
Who’s in it: Anna Faris, Allison Janney, French Stewart, Matt Jones, and Nate Corddry
What’s it about: A newly sober woman working as a waitress in Napa Valley and dealing with her estranged mother

We Are Men
Who’s in it: Christopher Nicholas Smith, Jerry O’Connell, Kal Penn, Tony Shalhoub, and Rebecca Breeds
What’s it about: A twentysomething single man moving into a rental complex and befriending three other singles