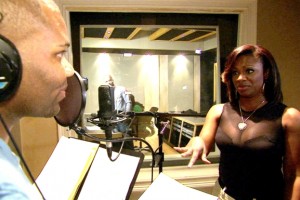 Bravo has announced a series of scheduling changes that will impact three of its shows, including two currently airing. The Kandi Factory, featuring Kandi Burruss mentoring aspiring singers, moves to Sunday nights at 10:00 beginning May 5th. The show had been airing on Tuesdays and will now finish its first season on May 26th. Meanwhile, Kim Zolciak’s Don’t Be Tardy has been pushed back to the 10:00 hour on Tuesdays, where it had been airing at 9:30. Also, the season premiere of Chef Roble & Co. will now air Wednesday, June 5th at 10:00, a day later than its originally announced date.

-John Oliver is set to assume his guest hosting duties on The Daily Show Monday June 10th, as Jon Stewart takes time off to direct his first feature film. Stewart is set to return on Tuesday, September 3rd.

-Oprah Winfrey’s interview with the first openly gay active NBA player, Jason Collins, will air Sunday, May 5th at 8:00 on OWN. The interview will also feature Collins’ parents and twin brother Jarron.

-KSL, NBC”s Salt Lake City affiliate, has decided it will no longer air Hannibal, citing viewer complaints about the serial killer drama. The affiliate, owned by the Church of Latter-Day Saints, has already pulled The New Normal this season, long been opposed to Saturday Night Live, and yanked The Playboy Club in the fall of 2011. Hannibal will now air on Salt Lake City’s CW station, KUCW.

-ABC Family has released descriptions for the season premieres of Melissa & Joey and Baby Daddy.

Melissa & Joey – “Works for Me” (May 29th – 8:00)
Joe pursues a new job opportunity, sending Mel into a panic when she realizes he may actually leave. But the job isn’t quite what Joe expected, causing him to reevaluate his place in the house and Mel’s scheming to prove how much everyone needs him. Meanwhile Lennox thinks her artist boyfriend, Zander, may have found another muse, and Ryder’s class trip has an unexpected outcome.

Baby Daddy – “I’m Not That Guy” (Wednesday, May 29th – 8:30)
Ben thinks he might like Riley and tries to convince her he’s changed his playboy ways. Riley invites Ben to be her date at a work party, but Ben’s efforts to prove he’s dependable fall short. Danny hopes to come to Riley’s rescue, but arrives only to find Riley getting friendly with another man (guest star Matt Dallas). Meanwhile, Tucker schemes to go out with a model, and Bonnie attempts to get to know a handsome stranger…with a little help from Emma.

–Dallas has officially been renewed for a third season by TNT. Season three is set to have 15 episodes and launch in early 2014, though there’s no word on if they’ll run consecutively or if some will be held for a summer run.

Ray Donovan (June 30th – 10:00)
Set in the sprawling mecca of the rich and famous, RAY DONOVAN stars Emmy(R) and Golden Globe(R) Award nominee Liev Schreiber in his first lead television role as LA’s best professional fixer. Ray is the man called in to make the city’s celebrities,’ superstar athletes,’ and business moguls’ most complicated and combustible situations go away. This powerful drama unfolds when his father, Mickey Donovan, played by Oscar(R) winner Jon Voight, is unexpectedly released from prison, setting off a chain of events that shakes the Donovan family to its core.

Web Therapy (July 22nd – 11:00)
Season three finds Fiona (Lisa Kudrow) coming to terms with the new landscape of her life – her politically disgraced husband, Kip (Victor Garber), has run off with his male campaign manager; Fiona’s mother (Lily Tomlin) has started up a rival business called “Net Therapy” and has poached Fiona’s assistant Jerome (Dan Bucatinsky) to run it; her romantic friendship with media-mogul Austen (Alan Cumming) is on the rocks, now that he has fathered a child with hyper-sexualized Gina (Jennifer Elise Cox); she’s being investigated for campaign finance improprieties; and her unpublished manuscript is being adapted into a Broadway musical without her consent! All this, while she continues to offer “therapy” to the hapless clients who have wandered into her web…

Homeland (September 29th – 9:00)
HOMELAND Season 3 opens during the aftermath of the horrific terror attack that decimated the U.S. intelligence apparatus, and prompted a global manhunt for the world’s most wanted terrorist – Nick Brody (Damian Lewis). As Carrie (Claire Danes) and Saul (Mandy Patinkin) begin to pick up the pieces of their shattered professional and personal lives, they are swept up in the political and media firestorm surrounding the terror attack and the subsequent search for Brody’s whereabouts. The series also stars Morena Baccarin, Rupert Friend, Jackson Pace and Morgan Saylor.

Masters of Sex (September 29th – 10:00)
MASTERS OF SEX stars Michael Sheen and Lizzy Caplan, who will portray the real-life pioneers of the science of human sexuality, William Masters and Virginia Johnson. The series chronicles the unusual lives, romance and pop culture trajectory of Masters and Johnson. Their research touched off the sexual revolution and took them from a mid-western teaching hospital in St. Louis to the cover of Time magazine. The series is an adaptation of Thomas Maier’s book Masters of Sex: The Life and Times of William Masters and Virginia Johnson, The Couple Who Taught America How To Love.

-HBO has announced their documentary schedule for the summer. Included are Pussy Riot: A Punk Prayer (June 10th), about the arrests of feminist art collective Pussy Riot; Love, Marilyn (June 17th), coinciding with the 50th anniversary of Marilyn Monroe’s death; Miss You Can Do It (June 24th), spotlighting the first woman with a disability who competed in the Miss USA pageant; Gideon’s Army (July 1st), following public defenders from the south and the challenges they face; Gasland Part II (July 8th), the follow-up to the Oscar nominated original film; The Crash Reel (July 15th), a look at the life of Kevin Pearce, the American snowboarding champion who suffered a traumatic brain injury while preparing for the 2010 Vancouver Winter Olympics; The Cheshire Murders (July 22nd), exploring the triple rape-arson-homicide that rocked the quiet town of Cheshire, Ct. in July 2007; First Comes Love (July 29th), following director Nina Davenport’s quest to have a baby on her own; Casting By (August 5th), spotlighting Hollywood casting directors; and Americans in Bed (August 12th), features candid interviews with ten American couples – captured in the comfort of their own beds – as they openly discuss sex, infidelity and love.