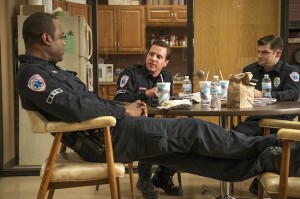 USA has announced that scripted comedy Sirens has been renewed for a 13-episode second season, likely to premiere in early 2015.

“Sirens resonated with a broad fan base, and we are excited to grow this new audience further, as season two promises a lot more laughs and irreverent humor,” said USA Network President Chris McCumber. “We’re pleased to continue our partnership with Denis Leary and Bob Fisher, whose unique brand of witty, off-kilter and laugh-out-loud writing is brought to life by the immensely talented cast.”

Averaging 1.62 million viewers, 870,000 in the key 25-54 demo, Sirens became the top new basic cable comedy series debut of the year. The series, executive produced by Denis Leary (Rescue Me) and Bob Fisher (Wedding Crashers), was the first original scripted comedy to launch under the network’s current push in the genre and showed ratings growth throughout its first season despite losing its lead-in halfway through. Renewal news for USA’s second original scripted comedy Playing House, which airs its season finale June 17th, has yet to be announced.

USA has been working overtime to diversify its programming beyond the so-called “blue skies” approach that vaulted it to the top of the cable heap. Last year, it premiered a darker procedural in Graceland, which is said to become fully serialized in its recently premiered second season, while picking up male escort drama Satisfaction, reality series Chrisley Knows Best, and two comedies in Sirens and Playing House.

Will you be watching the second season of Sirens? What type of comedy would you like to see USA pursue in the future? Should USA continue airing Sirens behind a drama or would they be wise to find a companion for it next year?