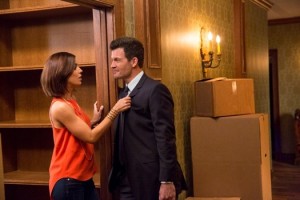 Nicholas and Opal happily lived together for 15 years following Dahlia’s death – 15 years that were quite isolated and infinitely dysfunctional, but they were 15 years that both parties seemed to enjoy all the same. That is, until Marisol came into the picture and shook up Opal’s perfect world; once, the housekeeper had this beautiful home and the handsome man who owns it all to herself, but now, there’s another figure in the home to deal with and it’s someone willing to dig into her past and the past of Nicholas. Marisol has already confronted her fiancée regarding his connection with Opal and Ethan, but would she be willing to push Opal out of the picture completely? What type of revelation would cause Marisol to speed up the process of ridding herself and Nicholas of Opal once and for all?

Listed below are the dates, titles, and descriptions of the next four episodes of Devious Maids.

Sunday, May 25th – “Private Lives”
Marisol discovers more secrets about Opal; Rosie tries to help Lucinda but it leads to further strife in the Miller family; Carmen prepares for a performance; Zoila goes on a date; Genevieve interferes with Valentina and Ethan’s relationship.

Sunday, June 1st – “Betrayal”
Marisol convinces Nicholas to get rid of Opal for good when more secrets about the Deering’s past become known. Meanwhile, Reggie becomes jealous when he learns of Rosie’s history with Spence; Carmen tries to let Ty down easy; Zoila gets closer to Javier; Adrian becomes suspicious of Evelyn and Tony’s relationship; and Remi tries to reconcile with Valentina.

Sunday, June 8th – “Night, Mother”
Nicholas asks Marisol a surprising question; Opal turns to Ethan for help; Genevieve invites Zoila and Javier over for dinner; Valentina gets caught in the crossfire when Evelyn and Adrian try to outsmart each other; Carmen and Spence deal with Ty’s misbehavior; Lucinda and Rosie argue about her behavior.