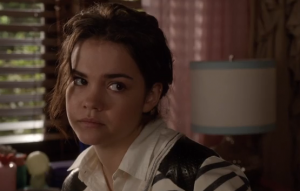 Just when it looked like Callie had found a purpose and a way to become more connected to her community, several e-readers were stolen from an office at Anchor Beach and it looks as if Daphne is going to take the fall, despite the fact that she could face jail time and the possibility of not getting her daughter back for something that she didn’t even do. Callie knows that Brandon’s vehicle was at the school that night and that there’s a strong chance Daphne didn’t do anything, but unless she’s willing to add his name to the list of people that were at the shoot or confront him herself about letting Daphne take the fall for his actions, the latter a way to guilt him into confessing, that knowledge will be for naught.

On the next episode of The Fosters, Callie struggles with whether to turn Brandon’s name into Lena and Stef. Though she may still have feelings for him, Callie knows she can’t let him sandbag Daphne, not when she’s inches away from getting her life back on track, yet she doesn’t know whether Lena and Stef would be willing to believe that Brandon was capable of something like this. Callie’s already given up Daphne’s name and Stef has expressed prejudice about those with a criminal record, so there’s an uphill battle in getting the right person pinned for the incident, a battle that Callie may not be equipped to fight right now. Should Daphne end up being punished for something that she didn’t do, it looks as if Callie will be losing a friend and watching as her world becomes all the more insular.

Elsewhere on The Fosters, Jesus continues feeling the effects of his complicated love life and not being on medication, while Lena and Stef reveal a caveat to Callie and Jude’s adoption and Mariana gets an unsettling glimpse into Zac’s home life when she meets his mother.

Do you think Callie should protect Brandon and not inform Lena and Stef that he was at the photo shoot? Is Jesus right to break things off with Lexi for a chance at something with Emma? Could Zac’s poor home situation be the reason he’s latched on so tightly to Mariana?