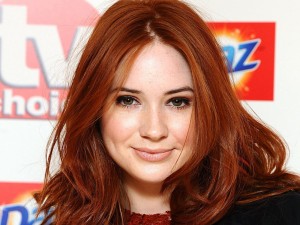 Dr. Who‘s Karen Gillan is making quite the switch from sci-fi.  She is currently set to star in Selfie, a pilot from Suburgatory‘s creator/executive producer Emily Kapneck.

Selfie is comedy about self-obsessed twentysomething Eliza Dooley, who is more concerned with getting “likes” rather than being liked.  After an ugly breakup leads her to being the subject of a humiliating video that goes viral, Eliza finds herself with more social media followers than she ever imagined…just, for all the wrong reasons.  She then enlists the help of a marketing expert to help repair her image.

Inspired by My Fair Lady, the comedy is produced by Kapnek’s own Piece of Pie Productions in association with Warner Bros. Television for ABC.

According to HitFix Gillan will not be using her native Scottish accent for the project.

Known for her performance as Amy Pond on Doctor Who, Gillan’s most recent TV credit is a role on Adult Swim’s NTSF:SD:SUV.  She can also be seen in the upcoming comic-book film Guardians of the Galaxy.