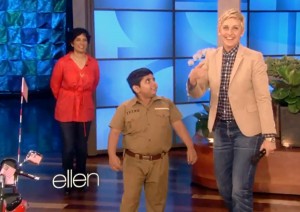 Akshat Singh, an 8-year old semi-finalist of India’s Got Talent stunned everyone with his dancing talent on The Ellen DeGeneres Show. This was his first visit to the US where he was invited on the show after his video of extreme Bollywood dance went viral on the internet. Not only The Ellen Degeneres Show but Akshat’s dancing skills also caught attention of CNN and Good Morning America.

Akshat made an entry on the show on a toy motorcycle, dressed as an Indian Police officer, imitating his favorite character and idol from the Bollywood movie Dabangg. The 8-year old prodigy left everyone awestruck with his handstands, flips and some other signature dance moves. The host of the show introduced the talented kid from Calcutta, India by saying a few words in Hindi, “Namaste, Mera naam Ellen hai” (Hello, my name is Ellen). On asked if he would make it to the semi-finals, Akshat said that he has gone to India’s Got Talent to prove that chubby people can also dance. He further told her that he dances for three hours every day and joked that he eats more. He added a phrase in hindi, which meant “if there’s no gas in the car, how will the car run?”

As a routine on Ellen, the host brought a flashy toy motorcycle for Akshat, which had his name bejeweled in the front.

Singh’s first appearance on the show India’s Got Talent was quite a major one where he stunned the celebrity judges Karan Johar, Malaika Arora Khan and Kirron Kher with his amazing dance moves. The judges even gave a standing ovation to his performance on a medley of Bollywood songs. His video on Youtube received around a million hits and was taken down and reposted by CNN. Model and actress Malaika Arora Khan shared her support for Akshat and said that he will surely amaze the international audience, the way he managed to floor his judges back in India.