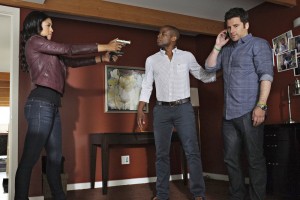 USA has announced that Psych is set to conclude its eight-season run on Wednesday, March 26th at 9:00, with a one-hour after show to air at 10:00 the same night. The after show will feature a live Q&A with the show’s cast and creator Steve Frank.

“Psych has made an indelible imprint on the television landscape, with a unique brand of comedy,” said Chris McCumber, President of USA Network, in a statement. “The final season celebrates the iconic characters that have made this show so beloved, and will be an exclamation point on the series’ incredible run. And while the series will wrap in March somehow I don’t believe we’ve heard the last of Shawn and Gus.”

Over the course of the show’s run, there’s been a Psych musical and college tour, while the series has been to Comic-Con five times and paid tribute to the likes of Clue and Twin Peaks in episodic homages. The series, which stars James Roday as a faux psychic detective and Dule Hill as his best friend, was also one of cable’s top five Wednesday series in 2013 in several demographics and attracted prominent guest stars for its eighth and final season, including Loretta Devine, Ray Wise, Bruce Campbell, Anthony Michael Hall, and Phylicia Rashad. Past guest stars have included William Shatner, Jane Lynch, Tony Hale, Christina Baranski, and Judd Nelson.

Psych returns for its final five episodes Wednesday, February 26th at 9:00 on USA. Current season eight episodes, as well as the two-hour Psych musical, are available on Hulu, VOD, iTunes, and the USA website.

Are you sad that this is the end of the line for Gus and Shawn? How do you expect the series to sign off after over 100 episodes? What level of closure are you expecting from the finale and the after show?