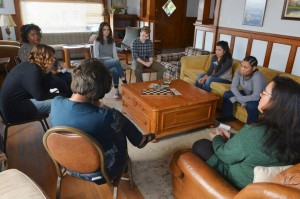 ABC Family has released The Fosters: Girls United, a five-episode web series that takes place in and around Girls United, the group home that Callie has been living in for the past few episodes of The Fosters. In Girls United, there’s been a mysterious disappearance of one of the home’s residents and those still remaining exchange their theories in a series of three to five minute episodes.

This isn’t the first spin-off web series that ABC Family has produced, as an eight-part Pretty Little Liars web series debuted in 2012, but it’s still encouraging that the network is firmly behind the well-received family drama, which has already been renewed for a second season. Stirred by the show’s positive reception and growing ratings this summer, as well as the reception of the Girls United storylines and setting during the winter season thus far, the network has further invested in the future of The Fosters and made clear that it’s a show that will be around for the foreseeable future. The only question is whether the existence of a spin-off web series is an indication that feelers are being sent out for the possibility of a Girls United-focused proper spin-off, as there’s the chance that if/when Callie leaves the home, it won’t be the last we see of these particular characters.

What did you think of The Fosters: Girls United? Are you encouraged that ABC Family is so firmly behind The Fosters? Would you watch a series that was focused solely on the goings-on at Girls United, even if/when Callie moves out?