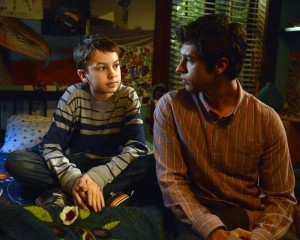 Now that Callie has left the Foster home with the intention of going to Indiana with Wyatt, it’s time for the other shoe to drop. Lena and Stef are eventually going to find out about the kiss and the fact that Callie ran away, but the only question is how they’re going to do it. At the moment, there are three options on the table – Callie slips up and makes it known that she left, possibly by contacting Jude while he’s in the presence of other members of the family; Jude lets Lena and Stef know what he saw at the reception, allowing them to make the appropriate logical leaps; or Brandon confesses to his role in Callie leaving and the family does its best to track her down and, most importantly, bring her home.

On the winter premiere of The Fosters, Brandon tries to see whether Jude is going to tell Lena and Stef about the kiss and gets guilted when the young boy compares him to Liam, saying that the two are really no different. Jude not only lost the one person who looked out for him his entire life with Callie’s departure, he might also have to relinquish the first sense of stability he’s found since he first went into the foster system, so for the moment, he doesn’t care how much Brandon says he loves Callie or what kind of pledges are made about things working out. He cares about the adoption going through; he cares about seeing his sister again; he cares about having the life that he should have had all along, something that he’s not going to let Brandon take away from him. But is Brandon going to confess to Lena and Stef after seeing how badly Jude is hurting without Callie?

Elsewhere on The Fosters, Mariana gets offended when Lexi suggests that the only reason she’s so upset about the relationship with Jesus is that she’s never had a boyfriend and doesn’t know what love is like.

The Fosters is set to return Monday, January 13th at 9:00 on ABC Family.

Do you think that Jude will be the one to tell Lena and Stef about the kiss or is Brandon going to step up instead? How will Mariana react when she finds out the real story behind Lexi leaving to Honduras? Will we see Callie at home with Lena and Stef by the end of the winter premiere?