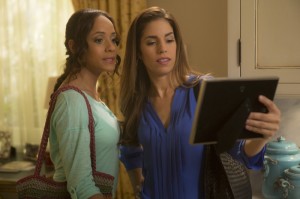 The closer that Marisol has gotten to solving the murder of Flora Hernandez, the more danger she’s put herself in on Devious Maids. While she has been fairly careful about keeping her nose to the ground and eye out for potential threats, there’s no way that she could have made progress in the case without drawing attention to herself, especially in the tight circle she’s been hunting for evidence. Unfortunately, though, Marisol’s visibility resulted in Taylor getting mistakenly shot, which will have one of two effects on the professor: either she’ll pull back and approach the investigation from a different angle or she’ll continue going full steam ahead, hoping that the shot means that the identity of Flora’s murderer is within her grasp.

On the season finale of Devious Maids, the mystery of Flora’s murder is solved, but there are three things that are more important than the case being solved: who did it, why they did it, and what effect this will have going forward. At the moment, Marisol suspects that Philippe Delatour is responsible, which the show seems to be pointing toward, given that he hired the assassin to keep Marisol quiet, he had involvement with Flora, and Remi immediately knew to get as far away from him as he could with the case ready to break open. While finding out that her ex-husband is a murderer  would be devastating for Genevieve, thereby harming Zoila in the process, there’s no guarantee that Philippe was the one who actually killed Flora, particularly with murder-mysteries’ tendencies for a surprise last-minute reveal and the implication that he raped Flora (or at least knew who did and condoned it), potentially impregnating her. The thought thus far has been that the man who impregnated Flora and the man who killed her are two different people, so if that proves to be true, Philippe might be compliant in the crime and the cover-up yet not directly responsible for her death.

The season finale of Devious Maids airs Sunday at 10:00 on Lifetime. The series was renewed for a second season last month.

Who do you think killed Flora Hernandez? Is it the same person who was the father of her child? Where do you think Devious Maids will go once the mystery is solved?