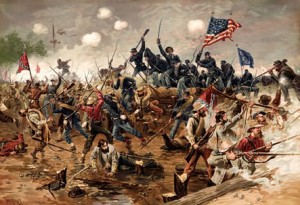 What if the Revolutionary War had ended differently?

That’s the question ABC is asking with a new drama set in an alternate universe where the that is exactly what happened.  Currently titled The Thirteen, the contemporary drama explores a world in which the colonies lost the fight for independence, and America is still fighting the British.

The project, still in development, comes from Allison Shearmur, based with Lionsgate TV,with Jim Agnew and Sean Keller of the upcoming Nicholas Cage thriller Tokarev writing the script.  This is Shearmur’s second television sale, as she is also curently developing the American Psycho sequel series at FX.

The Thirteen could end up joining the group of television shows that find their basis in actual historical events (Mad Men, The Americans), and NBC’s Revolution, depicting alternate realities as an outcome.