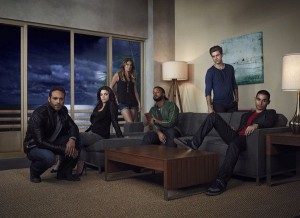 The series, inspired by true events and created by White Collar‘s Jeff Eastin, revolves around a Southern California safe-house – a.k.a. Graceland – used by undercover government agents, and FBI rookie Agent Mike Waren as he learns the truth, or lies, about why he was placed at Graceland in the first place.

Graceland premiered on USA in June, and has seen lifts in its viewership since, growing to one of the summer’s top scripted dramas.  It stands apart from the lighter programming on the cable net, with grittier, serialized storytelling coupled with stunning cinamatography and captivating chracters…not to mention the plethora of secrets and lies dotting each and every storyline.

The drama will close its first season this Thursday, with Season 2 presumably premiering in Summer 2014.