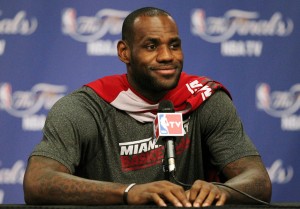 Just off a second championship win with the Miami Heat, LeBron James has a new project – developing a new half-hour sitcom with Starz.

Titled Survivor’s Remorse, the show will be set in North Philadelphia and explore the lives of two men from the inner-city streets who have attained fame – one an NBA star, the other, not – and how they deal with friends and families.

King James will not star in the sitcom, though he will be one of the executive producers.  He is developing the show alongside his longtime friend and business partner Maverick Carter, Tom Werner, producer behind The Cosby Show and Roseanne, Paul Wachter, and actor Mike O’Malley, who will executive produce as well as write.

In an interview with CBS, Carter made it a point that the show is not autobiographical about James, that it’s fiction, and added with a laugh that LeBron is “too famous” for the show to be about him.  Likely a reason why the show will not be set in James’ home town of Akron, Ohio.

LeBron himself described the show as “making it out of a place where you’re not supposed to…being one of the few to make it out and everyone looking at you to be the savior.”

Werner, James and Carter have worked together since 2011 as part of Fenway Sports Group, an organization that combines sports, media and entertainment.  Werner expressed his delight to bring the show to Starz, though the show is just in development and has no set timetable.

James also added that though it’s been years since his career launched, survivor’s remorse still weighs on him.

“I live with that, knowing that I have to hold a huge burden and responsibility that a lot of people cannot even think about.”

What do you think?  Will you tune in when Survivor’s Remorse premieres?