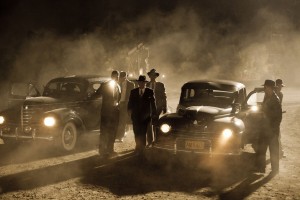 TNT has released the first new footage of Mob City (formerly known as Lost Angels), its upcoming noir-influenced drama from The Walking Dead‘s Frank Darabont. Starring Neal McDonough (Justified) as Los Angeles Police Chief William Parker, the series focuses on the corruption plaguing the LAPD and Parker’s attempts to rid his department of those with interests in seeing it fall, with a mob task force being formed to rid the city of its most famous (and infamous) connected men. However, despite Parker’s sterling reputation and authority within his department, keeping the force on the up and up won’t be as easy as he hoped it would be, not with all the money floating around the booming metropolis that serves as temptation for even the most strident of officer.

Mob City will mark a departure of sorts for TNT, keeping them in the crime genre that most of their programming resides in while expanding stylistically into a period setting (the 1940s) and a decidedly different aesthetic. How audiences respond to the series could determine whether or not TNT will continue to take risks with their development or fall back into strictly producing material similar to what they’ve done in the past.

Will you be watching Mob City? Does the official sneak peek make you more excited for the series itself? How much of a chance do you give a drama like this of succeeding on a network like TNT?