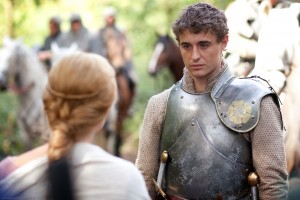 The crowning of young King Edward IV, facilitated by mentor and purported Kingmaker Lord Chadwick, was a punctuation mark in the ongoing conflict between the Yorks and Lancasters, two sides of the same family who had one goal: to win the throne of England. However, as one might expect, the Lancasters were not ready to give in just yet to the newly-minted York rule, setting up at least one more battle meant to knock Edward off the throne and reinstall King Henry as leader of the country. But on the series premiere of The White Queen, Edward has other things on his mind than riding into another conflict with the Yorks when he meets Lancastrian widow Elizabeth Woodville.

The two are initially drawn together over a land dispute, but they quickly discover a mutual attraction that leads to Edward, who’s on the cusp of a final battle with Henry, asking for her hand in marriage. One could argue that nerves played a role in the proposal, as this would be the first battle he rides into as King of England; however, no matter the origin, Elizabeth now has a chance to set her children up for life following the death of her first husband and get herself into a position of power admired by many. The only problem is that the Lancastrians in the country will think that she’s turning her back on them and the Yorks won’t exactly be quick to embrace her, let alone the fact that there will be several women gunning to take over the role of Queen of England from Elizabeth. Could the marriage also have a negative effect on Edward’s interactions with the Yorks, sabotaging his chances of solidifying his rule and putting a target on both himself and Elizabeth in the process?

Elsewhere on The White Queen, Elizabeth has begun having visions like her mother Jacquetta, though she doesn’t know how to control them or how to harness the information she receives from them into her everyday life. If she is to be the Queen of England, her visions could become an asset, as she has to stay at least one step ahead of the challengers to the throne. However, what would happen if Edward were to find out that she was blessed with such a gift?

The series premiere of The White Queen airs Friday at 10:00 on Starz before repeating the following day at 8:00. Beginning with its second episode, the international acquisition will air Saturdays at 9:00. You can check out a trailer for the series here, as well as an overview of what to expect here and spoilers for the first three episodes here.

Do you think it’s wise for Elizabeth to be moving so quickly with Edward, considering how the fact that they come from two different Houses? Will Jacquetta be able to help Elizabeth figure out how to use her visions to her advantage in her role as Queen of England? Can Elizabeth manage to keep her relationship with Edward steady while fending off the challengers to her position?