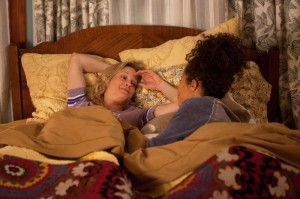 Lena Adams arrives at the Chula Vista Detention Center to meet with David and Bill, two men who work for CPS. However, the talk quickly turns from the original purpose of the meeting to the emergency need to place a teenage girl discharged from the center that day. Callie, who was taken in after inflicting severe property damage on her foster father, emerges from the doors noticeably beaten and bruised, as she was ganged up on by several other inmates while waiting to leave. While Lena isn’t sure that she wants to take home another child, she’s assured that it will only be for a few weeks; besides, when she sees how vulnerable and broken Callie is, she can’t bring herself to leave the girl all alone.

Lena’s household consists of Mariana and Jesus, twins who were brought home eight years ago and officially adopted five years ago, as well as Brandon, a musician and the only biological child in the house. His mother, Stef, is a police officer and conceived him during her marriage to her ex-husband and now she’s happily together with Lena, who didn’t ask her before bringing Callie home. Once everyone’s at home, they catch up (Brandon’s in the finals of a music competition that could land him a scholarship, Mariana has backed out of the idea of meeting her birth mother) while Callie goes to the bathroom to cry and continues to be (unintentionally) rude to all around. After making a comment about Lena and Stef being “dykes”, Stef takes Lena outside and asks her what they know about this girl, also reminding her partner that they can’t save every child in need. Lena mentions how sad Callie was when she saw her and brings up that this should only be for a few weeks.

The two sit Callie down and tell her about her curfew (7 p.m. on weeknights, unless cleared with one of them) and the fact that she has to go to school – namely, Anchor Beach Charter, which Lena is the Vice Principal of. However, Callie’s more concerned about her sleeping arrangements and takes to the couch with two pillows, a new change of clothes, and a fresh attitude, once Lena gently tells her to bring the sass down a notch. Lena tries to get answers as to who Jude, the name Callie mentioned upon getting out of the center, was, but there’s no such luck in finding anything out from the closed-off girl.

While Stef goes to ask Brandon to be nice to Callie and act as a good example to his siblings, Mariana is caught stealing pills from the kitchen by Callie and, later, Callie “borrows” Brandon’s phone to call Jude. In the master bedroom, Lena apologizes to her partner for bringing another child home and informs her that she appreciates the effort she’s making, even with Callie being cold and distant.

The next morning is noisy, crowded, and likely overwhelming for Callie, who gets a cup of coffee, much to the chagrin of Lena and Stef. Once at school, Brandon’s charged with showing the new girl around and nearly ditches her to go practice for the competition; when he leaves her alone, she immediately becomes self-conscious and chases after him, spending the time before her first class in the music room listening to his instrumental piece. The song, based on the night his moms asked him if they could bring Mariana and Jesus home, seems to bring the two closer together, although Brandon’s girlfriend Talya interrupts and marks her territory accordingly.

In her first class, Callie is seated next to a boy named Aiden and sees his car keys on a chain hanging from his pants. She talks to him in the hallway and asks him to show her around – particularly around San Ysidro, near Tijuana. He gets weirded out thinking that she wants to party and declines, wishing her luck in the process. Meanwhile, Jesus assures Mariana that if she wants to meet Ana, their birth mother, he would go along with her. She had been the one who led the charge in hopes of seeing Ana before recanting recently, so while Jesus is still not that invested in the idea, he wants his sister to know that she doesn’t have to worry about facing this alone. However, things between them get noticeably tenser when he tries to get $5.00 from her wallet after forgetting his money and sees a wad of cash come tumbling out.

Later, Mariana catches Callie asking about the bus station and the two basically say that while they know stuff on each other (Mariana taking the pills, Callie heading out the door), neither is going to narc the other one out. Mariana even gives her advice about which way to leave the house (out the back, since Lena’s office faces the front) and directions to the nearest bus station (three blocks). Callie decides to leave school following seventh period, but Brandon sees her and tries to talk her into coming back. She keeps going, though, and only stops when Jude calls Brandon’s phone once again. She answers and it seems like someone takes the phone away from him before she reveals to Brandon that Jude isn’t her boyfriend – he’s her brother.

Jude is still with her foster father and there’s no way for the cops to be involved, due to the complaints he made against her. She doesn’t have a case against him with those lingering over her head, but she needs to get him out of the house, since he’s been physically and emotionally abusive to both she and Jude. The incident that sent her to the detention center revolved around her foster father catching Jude putting on one of his ex-wife’s dresses and subsequently beating him. While he had hit her before, turning on Jude was a whole other thing and she defended him by grabbing a baseball bat and destroying her foster dad’s Trans Am. The cops were called, he claimed self-defense (and that she went insane), and she ended up where she did. Thus, she and Brandon are heading to San Ysidro to try and rescue Jude.

The only problems with that are A) they didn’t tell Lena or Stef where they were going and B) Brandon’s competition is that night. Invited are the siblings, though Mariana claims to be sick, and Mike, Brandon’s father and Stef’s ex/co-worker. That day, he had requested to be named her partner after she lost hers to another city and Lena confronts him over it, only to find out that it was for Stef’s protection. He felt much more comfortable knowing she was taken care of with him vs. putting her in the car with a rookie who might not be able to hang just yet.

The three adults quickly discover that Brandon and Callie are gone, leading Stef to use the app she put on their phones meant to track cell phone signal. She traces him to San Ysidro and everyone but Mariana and Jesus leave to go find the two. The twins, meanwhile, have their own conflict brewing. Jesus accuses Mariana of taking some of his medication and finds out that she did so to sell them and make the wad of cash that fell out of her purse. But why? What did she need the money for? It turns out that she had been in contact with their birth mother and planned to meet her that night on the beach to give the money over.

Mariana does end up on the beach and sees her mother for the first time in years. However, her mother is more concerned about the money and once she gets it in her possession, abruptly leaves her daughter without talking to her, asking her where she’s at in life, or reminiscing about the days when they were together.

Callie and Brandon arrive at Jude’s home and he tries to distract the father long enough for Callie to sneak in and take Jude. However, she’s too slow and her foster father begins manhandling her before getting a handgun from a table drawer and pointing it as Brandon. Fortunately, Stef and Mike arrive just in time and arrest the father, possibly saving at least one life in the process. Jude gets taken out of the house and Stef makes sure to tell Callie how badly this could have ended for all involved. However, she reassures her that she’s not worthless nor is she disposable, so going back to the center isn’t an option right now. She then tells Lena that there’s no need for anyone to pick the kids up the following day – they’re not nearly ready to be in the system yet again.

Additional thoughts and observations:
-So, hey, you guys. I’m not 100% sure if I’m covering this weekly or not yet – if you want me to, please read and share and all that. I’ll be deciding based on the numbers.
-Is the house layout unusual to anyone else? The main culprit is the laundry room being tucked inside the master bedroom – I’ve never seen something like that before, especially on TV.
-I’m definitely in the camp that thought Jude was Callie’s (likely older) boyfriend, so good on you, writers, for pulling off an effective bait-and-switch. The revelation was also interesting vis-a-vis stereotypes, as you have to consider that you thought the tough, troubled girl would be willing to screw this family over and be fast enough to have an older boyfriend.
-Something minor that I appreciated was Stef being the one with the biological child. A lot of other shows would have made the more conventionally feminine Lena the member of the relationship with a heterosexual past, so that was a nice surprise.
-Another small thing I liked: Mariana and Jesus speaking Spanish to one another. (And Stef knowing enough to converse with them.)
-A 7:00 p.m. school night curfew is a bit much, though, no?
-This would be one of the last shows I expected a dick joke from, especially in the pilot, but I have to admit that the “Moby Dick” scene made me giggle a bit.
-Anchor Bay is a very, very TV high school. (The nearby beach, the water.) Pretty to look at, though.
-Mariana’s IM service was a tad archaic. Would that they had her on ICQ, though.
-The last, say, 10 minutes of the episode were especially moving to me, for some reason, particularly the climax of the confrontation with the foster father and Stef telling Callie that she’s not disposable. That all could have been rote and eye roll inducing, but it was strikingly genuine and impressive to watch.
-Next week on The Fosters: Lena and Mike clash over Brandon’s punishment for running off with Callie, while Jesus gets into a fight at school and Mariana lets someone else take the fall for her actions.