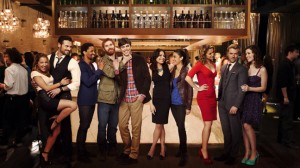 ABC has released trailers for each of its new shows for 2013-2014. Included are seven dramas and five comedies, including Once Upon a Time spin-off Once Upon a Time in Wonderland, Rebel Wilson comedy Super Fun Night, and Resurrection, based on Jason Mott’s “The Returned.”

Which trailer do you think looks the best? Which looks the most disappointing? What will you be watching on ABC next season?

Back in the Game
Who’s in it: James Caan, Lenora Crichlow, Maggie Lawson, Ben Koldyke, and Griffin Gluck
What’s it about: Baseball might be America’s favorite pastime, but for the Gannon family it’s also in their blood.

Betrayal
Who’s in it: James Cromwell, Stuart Townsend, Hannah Ware, Henry Thomas, and Chris Johnson
What’s it about: It started with a chance meeting at an art gallery. Photographer Sara Hayward and Attorney Jack McCutchen both felt it, a sudden spark and with it, an undeniable feeling of instant attraction. Both are married, albeit, unhappily to other people.

The Goldbergs
Who’s in it: George Segal, Jeff Garlin, Hayley Orrantia, Wendi McLendon-Covey, and Troy Gentile
What’s it about: Before there were parenting blogs, trophies for showing up, or peanut allergies, there was a simpler, awesome time called the ’80s. For geeky 11-year old Adam (Darien Provost) these were his wonder years and he faced them armed with a video camera to capture all the crazy.

Killer Women
Who’s in it: Marc Blucas, Tricia Helfer, Michael Trucco, Alex Fernandez, and Marta Milans
What’s it about: Of all the notorious lawmen who ever patrolled the violent Texas frontier, none are more storied than the Texas Rangers. And none could be more macho. While the once all-male bastion now allows “lady rangers”, no one can say they are welcomed. Being the only female ranger in this elite squad isn’t going to stop Molly Parker (Tricia Helfer), she’s ballsy and badass enough to get the job done despite a good-ole network filled with harassment and discrimination.

Lucky 7
Who’s in it: Matt Long, Anastasia Phillips, Christine Evangelista, Lorraine Bruce, and Luis Antonio Ramos
What’s it about: Every day, across the country, Americans imagine what it would be like to strike it rich. They dream of new houses, new cars, new everything. It’s just a pipe dream. It could never happen to them……but what if it did?

Marvel’s Agents of S.H.I.E.L.D.
Who’s in it: Clark Gregg, Ming-Na Wen, Chloe Bennet, Brett Dalton, and Elizabeth Henstridge
What’s it about: From executive producers Joss Whedon who also co-writes and directs the pilot, Jed Whedon & Maurissa Tancharoen, Jeffrey Bell, and Jeph Loeb comes Marvel’s first TV series. Witness the astonishing return of Agent Phil Coulson as he puts together a small, highly select, team to investigate the new, the strange, and the unknown secrets of our world as Agents of Shield.

Mind Games
Who’s in it: Christian Slater, Steve Zahn, Wynn Everett, Megalyn Echikunwoke, and Cedric Sanders
What’s it about: Need help getting a job? How about convincing your daughter not to marry her loser boyfriend? Whatever it is you want, Clark (Steve Zahn) and Ross Edwards can help you get it. They’re not magicians, nor wishful thinkers. Clark and Ross are brothers and partners in a unique agency committed to solving clients’ problems using the hard science of psychological manipulation.

Resurrection
Who’s in it: Kurtwood Smith, Frances Fisher, Nicholas Gonzalez, Omar Epps, and Samaire Armstrong
What’s it about: What happens when the people you have mourned and buried suddenly appear on your doorstep as if not a day’s gone by? Would it be a miracle, madness and is it even real? The people of Arcadia are forever changed when their deceased loved ones suddenly start to return.

Super Fun Night
Who’s in it: Rebel Wilson, Liza Lapira, Kelen Coleman, Kevin Bishop, and Lauren Ash
What’s it about: All work and no play makes Kimmie a dull girl. No chance of this young junior attorney being called that. Kimmie Boubier (Rebel Wilson) and her two best friends Helen-Alice (Lauren Ash) and Marika (Liza Lapira) have a standing date every Friday night for the last 13 years. They even have a motto for what they call Friday Night Fun Night.