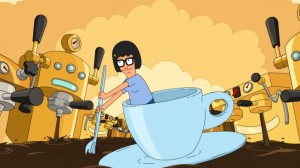 Gene has joined a recreational baseball league but seems more interested in testing out his cup or commenting on his “top” rather than learning how to be a good player. At his first game, Gene’s busy playing his stomach like a bongo and using the eye black to draw on half his face; however, his coach is forced to play him, since there’s a rule within the league that every team has to play every player. Gene’s terrified of being hit by the ball and doesn’t take to either batting (where he tries swinging three times in a row to strike himself out rather than face another pitch) or fielding (where he uses his cup to protect his head from a fly ball).

As a result of the experience, Gene vows to never set foot on a baseball field again. Linda begins asking Bob about giving his son extra coaching to get him ready for the next game – Bob never played catch with Gene when he was younger, so they’re going to have to work extra hard to catch up to the other boys on the team. Their first practice, though, ends up with Gene throwing the ball in Bob’s face and the two getting into a garbage fight, complete with flung dirty diapers. Frustrated, Linda digs into the world of Google and finds a day camp that Gene could go to, which is ran by The Deuce of Diamonds, formerly known as The Prince of Persuasion. In the slickly edited video, the Deuce makes it seem as if anyone who goes to his camp will end up hitting home runs – for $495. Bob immediately says no, not even after being guilt tripped by Linda, who goes to the pawn shop to try and unload some of her porcelain figures to no avail.

There’s a new piece of machinery at the restaurant in the form of an espresso machine. Bob’s immensely proud of having the expensive, (in his mind) high class coffee machine and tries to get Teddy to try a cup of espresso in celebration. However, Teddy hates the tiny cups, as they make it look like he has giant hands, and rejects Bob’s offer. Tina gets the cup and, while at first remarking how terrible it is, immediately becomes addicted to the caffeine. She hallucinates rows a boat made of an espresso cup in a river of coffee before diving into another cup of coffee and doing the backstroke, a hallucination filled with both unicorns and Teddy.

Tina’s addiction becomes severe quite quickly, her speech quickening, her confidence growing (she asks Jimmy Jr. out on a date while he’s out riding his bike), and her mood swings becoming much more pronounced. Just as she’s in the middle of being a caffeine addict, Linda and Louise decide to sell the espresso machine to pay for Gene’s camp – Bob hasn’t sold a cup yet and neither think he will  and therefore won’t notice that it’s gone.

Gene makes it to camp, where the Deuce gets all attendants to view themselves as the boss of their glove and refuses to use a ball, as baseball is all in the mind. Meanwhile, Tina is going through caffeine withdrawals thanks to Bob cutting her off from the espresso, causing her to snap at Teddy and Jimmy Jr. and desperately ask for a bite of the bean. It’s then that Teddy decides to give espresso a try, even though Linda tells him it could shrink his penis. Bob’s, of course, upset that they took the machine without telling him, replacing it with a pack of toilet paper, and that Linda sent Gene to the camp that he didn’t want him to go to.

At the camp, while Andy and Ollie decide to become umpires rather than players, the Deuce is having problems with the manager of the hotel he’s staying at. He’s $1,100 in debt with no way to pay and thus decides to take the kids from camp with him while he paid off as much as he could. Unfortunately, he doesn’t have enough money to pay his debt in full and orders the kids to begin hitting the manager’s soda machine in a bid to get him to lower the price.

Meanwhile, Bob and Linda arrive at the camp where they find a gym bag and no kids. They see the hotel towels and drive over to find their son hitting the soda machine; Linda encourages his swing, while Bob demands his money back, seeing as how the Deuce is a fraud. He challenges the Deuce to a pickup game in a nearby vacant lot – if Gene gets a hit, Bob will let him keep the money. If he doesn’t, the Belchers get a full refund. After Tina sings the national anthem, the game gets under way and Gene’s swing is noticeably better, helping him make contact on the first pitch. It’s a very high pop up that Andy and Ollie should have – if they weren’t too busy arguing over who would get it. They decide to share the fly ball, which bounces off their gloves and hits the ground. Gene runs hard to the base and is declared safe, just as the Deuce flees the scene with the money.

Bob’s not too disappointed about losing the money, though. He’s happy that Gene’s happy and that his son got a dose of confidence form his experience at camp. Tina, meanwhile, isn’t over her addiction to coffee and ends the episode chugging the week-old pot from the hotel the Deuce stayed in.

Additional thoughts and observations:
-“I think that’s the electric slide.”
-“What doesn’t break my testicles only makes them stronger.”
-“Yeah, it’s an acquired taste – that I just acquired.”
-“Gene, you’re in.” “What about urine?”
-“Quiet dignity? Have you met us?”
-“Last chance to earn my love, guys.”
-Gene referring to his jersey as a top was adorable and very, very Gene. As was his Toad the Wet Sprocket reference.
-I liked the evil Gene/good Gene dilemma, especially since evil Gene’s facial hair was very blobby and not drawn in correctly.
-Cute gag with Bob not knowing what to call the burger of the day and Tina taking the word gouda and running with it. My favorite was Gouda Gouda Gum Drops.
-Linda has a Spanish copy of 50 Shades of Grey. Because of course. Also, her giggle after Louise said “I told you you’d like crime, mom” was the best, as was her telling Bob that she’s rather waste money on Gene than an espresso machine.
-Linda and Gene go for mani/pedis together. I kind of want this to be a subplot next season, a spa day with the two of them.
-REGULAR-SIZED RUDY. Please let him be a peripheral character like Andy/Ollie, Teddy, and Mort next season.
-Thank you guys for sticking with me and reading my Bob’s Burgers recaps, everybody. I hope you enjoyed this season as much as I have. See you sometime in the fall?