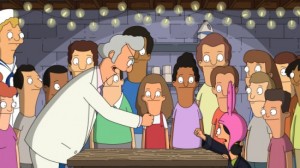 It’s Fleet Week on Bob’s Burgers and that means that Bob, Linda, and the kids are preparing for a sudden onrush of traffic. However, Bob accidentally cuts his hand during a chaotic day at the restaurant and has to have Linda take him to the hospital, since he immediately becomes woozy and couldn’t drive himself. They tell the kids to go upstairs and wait for them to come back home, closing the restaurant for a few hours in the process, but Louise immediately gets bored, rejects babysitter Tina’s attempts at operating a pretend restaurant, and achieves her goal when the three open up the restaurant. Tina and Gene fight over what they should serve (kale and treadmills vs. chicken) before Louise offers a new perspective – gambling.

The three decide to open up a casino named The Meat Grinder in their basement; Andy and Ollie handle PR, Zeek acts as the bouncer, the Mathletics geeks work as the dealers, Tina is in charge of hospitality (hot towels, drinks, etc.), and Gene entertainment. He’ll be debuting the new girl group that he formed at school known as The Cutie Patooties, made up of Misty Gish, Dottie Minerva, and Girl #3. While they plan how to perform, since they never rehearsed and the girl Gene designated lead singer can’t carry a tune, the casino gets very lively, with Louise having to kick out someone for using hand signals and comfort a boy who lost his allowance playing one of the board games. It’s then that Mr. Fischoeder comes into the basement after stopping by to use the bathroom, only he doesn’t get them in trouble or break anything up. He decides to join in on the action, losing badly before picking up rock, paper, scissors and going on a winning streak that draws Louise’s attention.

Facing the emergence of Girl #3 as their new lead singer, The Cutie Patooties break up, citing the need to focus on glitter sticks, pets, and the art of french braiding. As a result, the casino doesn’t have any entertainment, though Gene thinks he can be a girl group all by himself and immediately puts on a pink sparkly dress and belts out some “Girls Bein’ Girls”. However, all the attention is on Louise and Mr. Fischoeder engaging in a fierce game of Roshambo that the youngest Belcher can’t seem to win. Eventually, she racks up a $5,000 debt, but before Mr. Fischoeder can collect, Bob returns from the hospital. With Fischoeder not backing down on collecting the debt and threatening to raise the rent $1,000 for the next five months,  Louise talks him into engaging in a double-or-nothing throw, even with his injured hand.

Bob throws scissors, since Fischoeder wouldn’t be expecting it due to the spot of the injury, and erases his debt when his landlord throws paper. Unfortunately, Bob rips open his stitches and has to go back to the hospital.

Hospital Hell
Since Bob cut himself on his “finger crotch” (the area in between two fingers), he goes to the hospital with Linda, which turns out to be incredibly crowded and full of people much worse off than he was. Everyone has a cough, a broken limb, or some form of communicable disease that makes finding a good seat difficult and nearly causes Linda to throw up. However, they get called back before anything happens and find that Bob’s the first patient ever for young Dr. Igerman, who only recently got to examine patients without an aide to help him. Linda’s quite taken with the doctor and gets Bob to take a picture of them to send to his mother, who texts during the appointment, a lack of focus that results in Bob passing out again and waking up with his whole forearm bandaged. On the way home, he bleeds through his bandages and ends up squirting blood on Linda, leading them to go back to the hospital; they then head home, where the find the kids having their casino and Bob, again, rips his stitches open, leading him to head to the hospital yet again.

Additional thoughts and observations:
-“Yay! Feet week!”
-“I just went pee! This is a disaster!”
-‘The kids are running Bob’s Burgers and this time, it’s personal.”
-“I wanna breast feed that face.”
-“I should gamble against children more often.”
-“Any outcome is possible, Tina. Life is chaos.”
-The business from the opening credits: Nothin’ but Notaries. The burger of the day: Top Butt Burger.
-I wonder if we’ll see Gene’s son Gumhead in any future episodes.
-I kind of wish that the “Gene forms a girl group” subplot would have been the B-story of another episode because it had a lot of possibilities and just kind of petered out. However, what they did give was very funny.
-Linda calls Louise her little Omarosa.
-Should Bob’s Burgers ever do a flash forward episode, here’s hoping they show Louise with a gambling problem. She got very intense this episode, even moreso than normal.
-Next week on Bob’s Burgers: Louise develops a crush on the lead singer of a boy band.