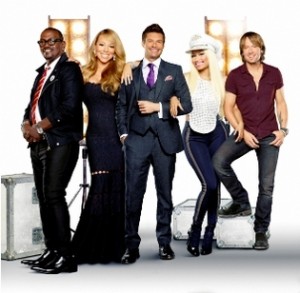 American Idol is back tonight to kick off its 12th season and, while the contestants are hoping to catch their 15 minutes (or more) of fame, it’s the almost all new judges’ panel that will most likely be stealing the spotlight.

This season on American Idol, Randy Jackson will be the only familiar face sitting at the judges’ table, having said goodbye to former judges Steven Tyler and Jennifer Lopez at the end of last season. Joining the resident “dawg” on the panel this year will be singer Mariah Carey, country singer Keith Urban, and rapper Nicki Minaj.

The return of a fourth judge to the American Idol format is interesting in and of itself, having not gone over well previously, however, that is not the only potential problem (or success, depending on how you look at it) facing the judges’ panel. There have already been numerous reports of in fighting between Mariah and Nicki while out on the road at auditions. While it remains to be seen if it was hyped for ratings or if a feud really exists, you can bet a good number of viewers tuning in tonight will be watching solely for the purpose of seeing a good cat fight.

I will be watching tonight with mixed emotions hoping for the best, but fearing the worst. Will the new judges be able to breathe life into a show that was once the most watched show on television? For the sake of loyal American Idol fans everywhere, I certainly hope so.