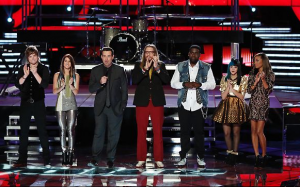 Last night on The Voice, the remaining six contestants sang not one, but two songs in their quests to earn a spot on in the quarterfinals next week. While some of the singers seem to be coping well with the pressure and even thriving (hello, Cassadee Pope), others look to be struggling with the amount of pressure and at least one contestant seemed flat out annoyed.

Team Blake is arguably one of the strongest teams left in the competition, a sentiment echoed by The Voice’s own Christina Aguilera last night after Terry McDermott and Cassadee Pope knocked everyone’s socks off with impressive performances. Terry, who took on Foreigner’s “I Want to Know What Love is” and Rod Stewart’s “Stay with Me,” continued to wow the judges with his consistency and pureness of tone. Cassadee Pope, too, impressed with Blake’s country pick, “Stand” and her own slightly more predictable choice, Avril Lavigne’s “I’m With You.” Both singers seem to be fan and coach favorites, so I believe it’s safe to say we can expect to see them next week.

Team Cee Lo is another heavy hitter when it comes to possibly taking home the crown this season with powerhouse singer Trevin Hunte and the charmingly awkward Nicholas David. As per usual, Trevin blew the judges away with his first song “Walking on Sunshine,” but it was his second song choice of “And I am Telling You I’m Not Going,” that had them all on their feet. Nicholas David, on the other hand, struggled through Earth, Wind, and Fire’s “September,” but came back strong with his rendition of “Somewhere Over the Rainbow,” a performance that Adam Levine claimed would most likely leave people weeping.

Team Adam came out strong last night with Amanda Brown on her game with two great performances of “Natural Woman” and “Here I Go Again.” While the first was impressive without a doubt, the second really showcased the type of music she is comfortable with and because she enjoyed performing it so much, I enjoyed watching it. Melanie Martinez, on the other hand, had a very rough night with a pitchy rendition of Gnarls Barkley’s “Crazy” and an incredibly awkward attempt at being cutesy and upbeat with Lenka’s “The Show.” Even the preschool looking backdrop couldn’t convince us that Melanie was light hearted or fun and if we were at all in doubt of that, her massive eye roll at Christina’s criticism affirmed it.

Tonight on The Voice, the remaining 6 contestants will find out if their performances last night peaked the viewers’ interest enough to earn a spot in next week’s quarterfinals. With so few contenders left in the competition, we will finally start to see the exit of some of the fan favorites and say good bye to some genuine talented individuals.