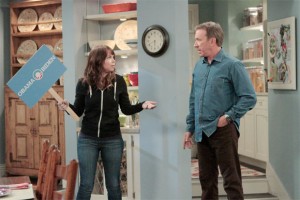 According to Deadline, ABC has given Friday comedies Last Man Standing and Malibu Country five-episode back orders, bringing their episode totals this season to 18 each. Both shows debuted to higher than expected numbers earlier this month and while they’ve come back to Earth a bit, they’ve had strong DVR viewing. The reason for the shorter order is that the shows premiered much later than the rest of the ABC line-up (November 2nd) and the network wouldn’t need a full 22-episode order for either.

With the success of both Last Man Standing and Malibu Country, the former winning its time period with DVR included and the latter holding 100% of its lead-in, ABC may try to expand its comedy reach on Friday and bring back a TGIF-inspired line-up of family comedies. The network has several that could conceivably air on the same night as Last Man Standing and Malibu Country and creative a cohesive schedule (The Neighbors, Family Tools, How to Live with Your Parents), so it’s all a matter of how confident they are in the already established shows.

Malibu Country stars country singer Reba McEntire as a woman who, upon finding out that her husband cheated on her, moves her children to Malibu to restart her singing career. Once arriving in the sunny paradise with a brand new life in front of her, she has to learn to adapt to life outside the Nashville bubble that she had been living in while keeping her children safe, healthy, and happy. The show also stars Lily Tomlin, Sara Rue, Justin Prentice, Juliette Angelo, and Jai Rodriguez.

Last Man Standing airs Fridays at 8:00 on ABC, with Malibu Country following at 8:30.

Are you watching either, both, or neither of Last Man Standing and Malibu Country? Did ABC make the right decision in giving them extra episodes? Would you like for their success to lead to more comedies on Friday nights?