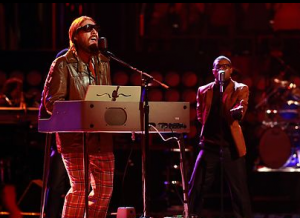 Last night on The Voice, the final 8 contestants performed live with performances they are hoping will be good enough to keep them in the competition for at least one more week. Now that it’s getting close to the end and with the December 18th finale rapidly approaching, the stakes are higher than ever, definitely kicking up the pressure for the remaining contenders.

Team Adam kicked off the night with Amanda Brown’s rendition of “Someone Like You,” a choice that could either really help her due to the popularity of the song or hurt her since so many people are accustomed to Adele’s version. The coaches acknowledged this risk, but seemed to think she’d be okay thanks to her strong performance. Also representing Mr. Levine last night was Melanie Martinez, who apparently has turned out to be the kid sister Adam never had (besides his real one). Melanie, on a high note after last week’s performance, went back to her blind audition roots and broke out her guitar and foot tambourine for her take on Alex Clare’s “Too Close.”

Team Cee Lo, the only team to have all three finalists left in the competition started off with Cody Belew and his rendition of the Queen classic “Somebody to Love.” Each week Cody seems to be focusing more and more on his stage choreography and style more than his vocals. This week was not much different and, while I do like the guy, I have to say that he didn’t come close to filling Freddy Mercury’s shoes. Trevin Hunte went back to what he does best with the power ballad “Greatest Love of All” and reminded audiences why they loved him so much in the first place.  Now, let’s talk Nicholas David. This guy is so talented and so fun; yet unassuming I can hardly stand it. Last night, he took the stage rocking some Stevie Wonder sunglasses and a pair of Native American braids and simply killed Marvin Gaye’s “What’s Going On.”

Team Christina, having lost Sylvia Yacoub last week, is now down to only one remaining contestant, putting all her eggs in Dez Duron’s basket…Yikes. While he is talented and can sing, he just doesn’t seem to standout or possess the stage performance ability that makes anyone besides little girls who like his handsome face take notice. Last night’s rendition of Justin Bieber’s “U Smile,” seemed like a clear ploy to capitalize on the girl vote, which I can’t blame him for, but I do hope that it is not enough to keep him around in the competition above other true standouts.

Closing out the night was Team Blake’s Cassadee Pope with Michelle Branch’s “Are You Happy Now,” a song type that she said she could see her emulating later in her career when she records her own music. Her choice paid off, as she knocked it out of the park, making everyone wonder if she might be a dark horse in this competition. Earlier in the night, Terry McDermott changed it up a bit with a Blake Shelton song choice, “Over.” While certainly not in his comfort zone, he did it justice and made his coach proud, hopefully earning him enough votes to land in the top 6 next week.

At this point of the competition, it’s anyone’s game (well, almost anyone), with Team Blake and Team Cee Lo looking real good to be at the finals. Team Christina is lacking with only one contestant left who seems to be hoping that his charm and smile will take him to the end. Team Adam is still hanging in there with two contestants left, however, both have proven to be somewhat inconsistent when it comes to the live shows. Tonight, we find out which two contestants will be leaving The Voice and which lucky 6 will be moving on to next week’s live shows.