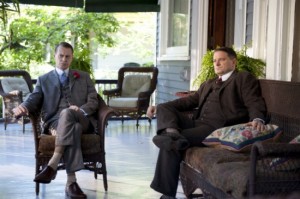 Tonight on Boardwalk Empire, the time for war is now. In addition to Rosetti, who is coming undone following the bombing at Babette’s, Nucky has to deal with Joe Masseria, who has an overwhelming army of men and seemingly infinite resources at his disposal. Nucky could take out Gyp in a one-on-one situation, since the fiery Italian will make a mistake sooner or later that could be pounced on, but adding in Masseria means that the Atlantic City kingpin will have to add allies to his team.

Luckily for Nucky, the likes of Rothstein and Luciano will put aside whatever differences they may have with his business acumen and leadership capability in order to protect their own interests. The alliance that Nucky is building looks to be more about the future – last week on Boardwalk Empire, he guaranteed each man that joins him a partnership stake in his endeavors, which is a much more favorable arrangement than an Atlantic City ran by Gyp Rosetti. He’s temperamental, arrogant, and unpredictable enough to where men like Rothstein and Luciano wouldn’t be able to conduct business under remotely fair terms, opting instead for deals/arrangements that benefit Rosetti and strengthen his position as the King of the City. There’ll come a day when Nucky’s position will be threatened by those closes to him, but now’s not the time.

Elsewhere on Boardwalk Empire, Gillian begins rethinking her allegiance to Rosetti when his thugs overrun her business, while Harrow is banned from the house.

Boardwalk Empire airs tonight at 9:00 on HBO. The show was renewed for a fourth season in October.

Who do you think has the advantage going into the episode: Gyp or Nucky? If Nucky is about to take down Joe Masseria, will he be able to get to Gyp more easily? How many of  Nucky’s (former?) allies will come back to help him stave off Masseria’s army and Rosetti’s fury?