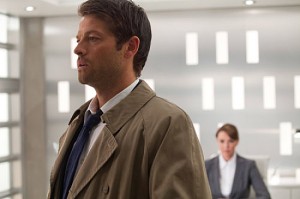 Castiel is back!! Mrs. Tran is back!! It’s difficult to go wrong with those two power phrases, isn’t it?

The introduction of prophet Kevin Tran’s mom to the world of Supernatural earlier this season was sheer joy. She’s so spunky and refuses to let anything get her down. She’s exactly what you would want a prophet’s mom to be, really. In “A Little Slice of Kevin” Mrs. Tran was in a bit over her head. She wasn’t afraid to ask for help, but when your son is a prophet of God, Craig’s List might not be the best option.

Yes, that’s right, Mrs. Tran went to where many of us go when looking for things locally, in this case, a witch to build a demon bomb. Personally, I wouldn’t trust a witch who advertised on Craig’s List, but Mrs. Tran is new to the game, and really doesn’t have a lot of options open to her. She did the best she could under the circumstances. Unfortunately for her, demons already had that base covered and her witch was a plant, leading Crowley right to their doorstep.

Meanwhile, Dean was having visions of Cas in very strange places. At least he thought they were visions, until he showed up. But something is up. Dean was right to wonder about it. Cas has no idea how he got out. They both remember Dean’s escape (and how cool was it that Benny rode along in Dean’s veins?), but Cas has no idea how he ended up on the side of the road. The best thing to come out of their walk down memory lane was Cas was able to put to rest Dean’s misinterpretation of events that he was at fault for not getting Cas out. Castiel chose to stay. For whatever reason, he let go of Dean’s hand. Dean really needed to hear that so he could stop beating himself up. It’s been a prevailing theme this year, and his pain has been a driving force in the decisions he’s been making. Maybe he’ll make different ones going forward.

With Cas back, the team set out to rescue Kevin, and the future prophets from Crowley’s clutches. We’ve very rarely had the opportunity to see Castiel the Angel is full regalia, but we were treated to it when he and Crowley went a bit “West Side Story.”  Crowley thought he was bluffing, as Cas sure didn’t look his best. When he spread his wings, there was no doubt God was on his side. Or was there? 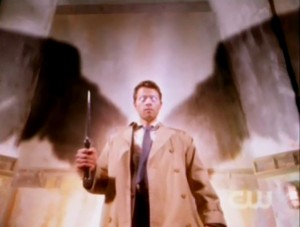 Later, when Cas was talking to Sam and Dean, he was swept away to what appeared to be Heaven, but it was a Heaven Cas had never been to before. Of all people, Amanda Tapping was manning the desk as Naomi. She told him he wouldn’t remember the moment, but he would report in frequently and keep and eye on Sam and Dean. Really. What is up with that? Was it really Heaven? Who let Cas out of Purgatory? The last we heard, Heaven wasn’t in the best state, with God having taken a vacation and all, totally fed up with humanity. Is he back on the job? Or are there darker forces pretending to be Heaven? Maybe the Winchester Brothers are earning their own wings? So many questions.

I’m more curious than ever now to find out what happened to Cas. I’m so happy he’s back and apparently sticking around. Misha Collins has become as important to Supernatural as Jared Padalecki and Jensen Ackles. Whether he’s here for good or evil, it’s all good in my book.