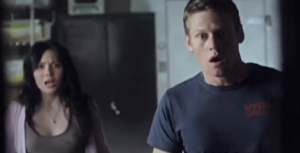 “The Killer” was not at all what I expected. Instead of nail-biting suspense, I found Vampire Diaries to be relatively boring. Until the last 15 minutes.

I’m disappointed that after everything Caroline has been through with Tyler she still thinks the worst of him when it comes to Haley. Tsk tsk tsk. I hope Phoebe Tonkin has more to do with breaking the sire bond now that she’s in town, because just standing around isn’t doing her acting skills justice. She needs to find someone to pair up with. My gut says Damon, because they would be so smoking hot, but Damon will remain in love with Elena for quite some time to come. I don’t want Haley used as a plaything.

April, on the other hand, looks adorable with Matt. They are the last two humans left in Mystic Falls. Could there be hope for them? I don’t know what Jeremy put on her wrist, but I’m guessing it’s some sort of protection bracelet. I’m enjoying Grace Phipps and April.

Before we jump into the good stuff, let’s touch briefly on Bonnie. Sorry folks, She’s still a pointless character. She hasn’t had a good story for years and this Professor Shane stuff is just crap. She’s only summoned when needed for a spell. Can’t someone else learn spells? She’s not Elena’s friend. She’s not Jeremy’s lover. What purpose does she serve? If you can tell me otherwise, I’ll go with it.

Onto the good stuff.

Stefan and Damon fighting had such potential, but Stefan killed that by riddling Damon with Vervain. Stefan thinks he’s protecting Elena by saving Connor for a cure, but he was so wrong to think that Damon wouldn’t want to save her I wanted him dead. Not Stefan, Connor. How could Stefan really be so blind not to have figured out by now that everything Damon does for Elena he does for the best of her? He wasn’t teaching her to feed so that she would lose herself and become a bloodthirsty beast, but because he knew she couldn’t survive without human blood. What was her choice? She could run around starving, refusing to eat because of how it made her feel to feed on humans, or Damon could try to make her see some of the fun in being a vampire, even if every ounce of his being wanted her to life to go differently.

Stefan’s lack of judgement in that area worries me. He’s so wrapped up in his own ideas of how to serve and protect Elena that he thinks anyone else who dares must be doing it for impure reasons. That’s why I can’t support their relationship. He thinks he’s putting her first, but it’s what he thinks of her that he considers before he worries about the girl, the woman, Elena. How brilliant was it that Damon told Stefan he loves Elena whether human or vampire and questioned Stefan’s own intentions? It still surprises me how many people ship Stelena. The only thing they seem to have in common at the moment are their Vampire Diaries.

Elena surprised them both by ending Connor’s life herself, didn’t she? By keeping his stupid secrets, Stefan did everything wrong again. He’s his own worst enemy. Even Damon standing up for his brother didn’t make up for the fact that it was Stefan’s inability to be truthful with the woman he loved that caused her to do the one thing he was trying so woefully to stop. In her first killing being Connor, Elena unwittingly made Jeremy the next full time Five member. Now he has to kill vampires, and a lot of them, for the tattoo to take over his body. Who’s going to create them for him to kill? Somebody has to do it, especially if that’s the only way to find a cure. Wait – does a cure even work if you’ve already killed? Or was Stefan just trying to stop Elena from losing her humanity from killing prior to receiving the cure?

Thank you last 15 minutes, for making up for the first 45 uneventful ones that I had to rewatch several times. I daresay it was worth the effort. Next week is going to kick ass. We will have not one, but to vamps to enjoy. Elena and Katherine! Mark your calendars and I’ll see you then!