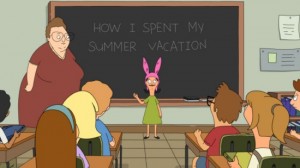 On tonight’s episode of Bob’s Burgers, Bob decides to do something that he never thought he’d do – fire Tina, Gene, and Louise. The kids didn’t do anything wrong, per se; Bob just feels like he’s depriving them of having a happy, carefree summer by keeping them cooped up in the restaurant for months on end. They got into such a routine with the work schedules that they need, in Bob’s mind, a chance to just worry about being a kid and wasting away a humid summer day.

To replace the kids, Bob and Linda bring in Mickey the Burglar, last seen in “Bob Day Afternoon” after getting an eight-year prison sentence for trying to rob the bank across the street from the restaurant. Out and needing a way to start over, Mickey already bonds with Linda, who likely is ready to have another adult around the restaurant, while Bob is feeling a little skittish about the idea of having him around. Tina, Gene, and Louise might not have been perfect workers and there was always the element of (potential) exploitation hanging over Bob’s head, but they were hard-working and could be counted on, which Bob doesn’t know if Mickey is yet.

But what are Tina, Gene, and Louise going to do with all the free time they have? One day while riding their bikes, the three siblings come across some blueberry bushes that belong to an older hippie couple. Back at the couple’s home, the kids reveal that they don’t have a job anymore after being fired by Bob, which makes the couple offer to hire them as “weed pickers.” After being so busy for so long, it’s only natural that the kids get a little restless when faced with a potentially boring summer, but I don’t think that inadvertently getting involved in the drug world was their idea of something to be the heat and the boredom.

Are you happy to have Bob’s Burgers back following the baseball hiatus? How will Bob react to finding out that his children are (unknowingly) in the drug business? What will Mickey do once he begins working at the restaurant?