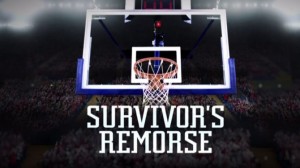 At their TCA session today, Starz revealed that reality-competition series The Chair is set to premiere Saturday, September 6th at 11:00. The project, executive produced by Chris Moore, pits two amateur filmmakers (Shane Dawson, Anne Martemucci) against one another in making their own movies. The catch? The two will be provided with an identical script – How Soon is Now, a coming-of-age comedy that centers on college freshman struggling with life after high school. Both directors will receive the same budget and use locations within the same city, with the winner being decided through multiplatform voting.

The project, which will allow the directors complete creative leeway (rewrites, casting, hiring of crew members), will be the first original unscripted series for Starz.

The network also revealed that comedy Survivor’s Remorse, their first attempt at original scripted comedy since Gravity in 2010, will premiere Saturday, October 4th at 9:00. The six-episode series tells the story of Cam Calloway, a talented basketball player who makes it to the pros. However, instead of being able to bask in the glow of a dream fulfilled, Calloway is forced to deal with the negatives that go along with being a professional athlete, including opportunistic friends. Executive produced by the likes of LeBron James, Maverick Carter, and showrunner Mike O’Malley, Survivor’s Remorse stars Jessie T. Usher (Level Up), Ronreaco Lee (Let’s Stay Together), Erica Ash (MADtv), Tichina Arnold (Martin), and Mike Epps (Being Mary Jane).

Finally, Starz released the first trailer for upcoming drama The Missing, which doesn’t have a concrete premiere date as of yet. A co-production between Starz and BBC, The Missing stars James Nesbitt (The Hobbit) as Tony, a man devastated by the abduction of his young son. He soon becomes obsessed with the boy’s disappearance, with his marriage suffering and his life threatening to cave in on itself. Written by Harry and Jack Williams (Honest) and directed by Tom Shankland (Ripper Street), The Missing stars Frances O’Connor (Mr. Selfridge), Jason Flemyng (The Curious Case of Benjamin Button), Arsher Ali (Four Lions), Tcheky Karyo (The Patriot), and Ken Stott (Rebus).