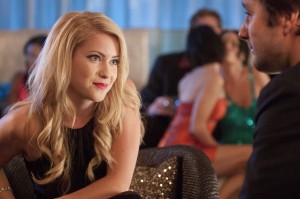 According to The Hollywood Reporter, VH1 has given scripted drama Hindsight a series order, making the show the third scripted project currently on the network. From Emily Fox (Ghost Whisperer, Jane by Design), Hindsight tells the story of Becca (Laura Ramsey), a woman on the eve of her second wedding. When she thinks about the decisions that got her to this point, she winds up going back to the morning of her first wedding in 1995.

The series joins cheerleading drama Hit the Floor and relationship drama Single Ladies as scripted content on primarily reality-centric VH1, which has looked to expand its scripted presence in recent years. The network also acquired reruns of cult comedy Happy Endings late last year and has been airing the show on Wednesdays.

Hindsight could be an interesting experiment for VH1, a way of expanding its audience and the subject matter that can find a place on its schedule. Thus far, the network’s scripted series are pop culture savvy soaps with dramatic twists, scandalous hookups, and an ensemble focus. Hindsight, though, sounds like a singular, fantastical drama that addresses issues not found in either Hit the Floor or Single Ladies, a refreshing choice that could give VH1 more room to play around with regards to scripted development if the show manages to hit. Sounding like a combination of Being Erica and Drop Dead Diva, Hindsight is different enough to stand out on VH1’s schedule, but will it be broad enough to appeal to those who wouldn’t normally watch the network? And will it be enough in the VH1 wheelhouse to where the network faithful will tune in?

Further casting for Hindsight, as well as additional information, should be announced in the coming months.

Does Hindsight sound like something you would watch? Will a show with this type of concept be able to work on VH1? What other type of scripted shows would you like to see from the network?