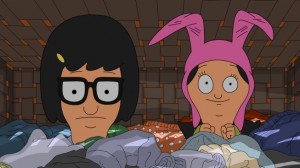 Adult Swim has acquired off-network cable rights to Emmy nominated animated series Bob’s Burgers. Beginning this summer, the comedy will have its first three seasons replayed, joining The Cleveland Show, American Dad, Family Guy, and King of the Hill as FOX animated shows airing on Adult Swim. Futurama, another FOX animated show with history on the network, moved to Comedy Central upon being resurrected from cancellation.

The move could help Bob’s Burgers improve its ratings performance from this season and prepare it to potentially assume the 8:00 slot when The Simpsons goes off the air. The show has already garnered a fair amount of critical love, earning its first Emmy nomination for Outstanding Animated Series this past year, so with the added attention that will come from a high profile debut on Adult Swim, it could be solidify itself as a show that will run on the network for years to come. Although syndication has lost some of its luster due to DVRs, streaming services, and endless viewing options, it has provided some shows with life-extending boosts; fellow animated comedies Family Guy and Futurama were put back into production due to strong repeat numbers and DVD sales, while the likes of The Big Bang Theory, NCIS, House, and Law & Order: SVU have all greatly benefited from stripped syndication.

Featuring the voices of H. Jon Benjamin, John Roberts, Eugene Mirman, Kristen Schaal, and Dan Mintz, Bob’s Burgers follows the Belcher family as they run their burger restaurant. The show has already been renewed for a fourth production cycle.

Bob’s Burgers airs Sundays at 8:30 on FOX. You can check out a recap of the most recent episode here.

Will having repeats airing during the summer help Bob’s Burgers come this fall? When The Simpsons goes off the air, is Bob’s in line to assume the 8:00 slot? How have you liked season three of the show as compared to the first two?