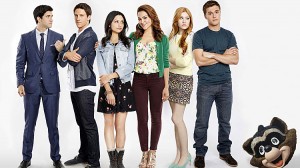 The first trailer for upcoming MTV dramedy Happyland has been released and in it, we get a glimpse at cynical Lucy (Bianca Santos), the daughter of a woman who works as a theme park princess. Tired of living in a world of make believe and the promise of a happy ending, she wants to get out into the world and experience different things, things that might not be as sunshine-y and happy as the theme park’s natural environment.

However, Lucy soon finds herself swept away by Ian (Shane Harper), the son of the man who recently bought the theme park. She never thought that someone could make her feel this good about herself and make her want to believe in all the mushy ideals that she’s been pushing away for as long as she could remember. As much as she might like Ian, though, and as much as those in Lucy’s life might welcome her change in disposition, things take a turn for the worse when she learns that there’s a chance Ian might be her half-brother.

Happyland is slated to premiere Tuesday, September 30th at 11:00 on MTV.

Will you be watching Happyland? Is the incest-y twist going to keep you away from the show, even knowing that the show would never go there? What would you like to see happen during the eight-episode first season of Happyland?