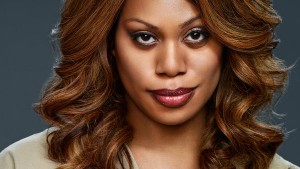 Bravo has announced that Orange Is the New Black star Laverne Cox is set to guest star on upcoming scripted series Girlfriends’ Guide to Divorce. She’ll be playing Adele Northrup, a Pulitzer-winning journalist and LGBT activist who presents an award at a marriage equality gala.

Based on the book series by Vicki Iovine and adapted for television by Marti Noxon (Buffy the Vampire Slayer), Girlfriends’ Guide to Divorce follows self-help author Abby McCarthy (Lisa Edelstein) as she navigates the Los Angeles dating scene following her divorce. While dealing with the fallout from her decision to separate from her husband and trying to repair the damage it caused her career, Abby turns to her divorced friends Lyla and Phoebe for advice on how to land on her feet and what her next move should be. In addition to Edelstein, Girlfriends’ Guide to Divorce stars Janeane Garofalo (Criminal Minds: Suspect Behavior), Beau Garrett (TRON: Legacy), Necar Zadegan (Rake), Paul Adelstein (Scandal), and C. Thomas Howell (Southland).

In addition to her role on the acclaimed Netflix dramedy, Cox has appeared on the likes of Bored to Death, Law & Order: SVU, and Law & Order.

Girlfriends’ Guide to Divorce began production last month in anticipation of its 2015 premiere. The project will be Bravo’s first venture into original scripted programming.

Will you be watching Girlfriends’ Guide to Divorce? Do you think the show will connect with Bravo’s audiences? Who else would you like to see guest star on the series?