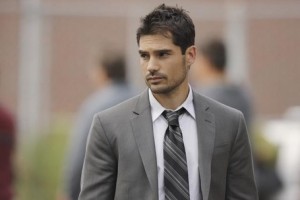 El Rey Network has released the official trailer for its first original scripted series From Dusk Till Dawn: The Series, based on the 1996 crime drama of the same name. Created and developed for television by the film’s director Robert Rodriguez, also an executive at El Rey, From Dusk Till Dawn: The Series follows a bank robber (D.J. Cotrona) and his unpredictable brother (Zane Holtz) as they pull off a deadly heist that leaves them running for the Mexican border. On the way out of town, they take a family hostage in order to commandeer their RV and soon enough find themselves at a strip club populated by vampires.

The series is said to deepen and expand the storyline presented in the original film, adding new characters and delving into the Mesoamerican mythology behind the creatures inside the club. Rodriguez will direct three of the first four episodes, while Juan Carlos Coto (Nikita, The Pretender, Journeyman) will be acting as showrunner and Greg Nicotero (The Walking Dead) will be in charge of makeup/effects for the series’ 10-episode first season.

From Dusk Till Dawn: The Series is set to premiere Tuesday, March 11th at 9:00 on El Rey Network, which launched late last year. For comparison’s sake, you can also check out a trailer for the original film, which starred the likes of George Clooney, Quentin Tarrantino, and Salma Hayek, below.

Will you be watching From Dusk Till Dawn: The Series? What other cult classic films would you like to see developed into television series? How do you think the television series will compare to the original film?