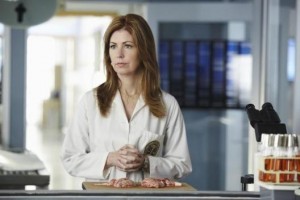 Any Body of Proof fans out there?

If so, there may be a small glimmer of hope out there for the Dana Delany-starrer.  Deadline is reporting that ABC may be considering bringing back the drama – talks that reportedly began at the start of the Fall season.  According to the site, the network is expected to make a decision to either move on with the revival, or leave it be within the next month.

No doubt, a tall order should ABC decide to bring the series back to life, as Body Of Proof cast members, writers, and crew, have since been permitted to move on.

Body of Proof‘s cancellation after three seasons this past Spring was strangely disappointing – though the procedural was far from being a hit, it was improving after a reboot.  The show had even won the California tax credit lottery, which helped to keep its production costs manageable.  ABC Studios, who then took a hit with the cancellation, fought hard for the series, but was unable to find it a home elsewhere after shopping it to such networks as TNT and USA Network, even the lesser-known but emerging WGN America.

Ratings aside, the flat cancellation, rather than say, shelving the series for a possible mid-season premiere (again), left the network scrambling after Lucky 7 crashed and burned in its timeslot.

If the show does return, Body Of Proof would hopefully follow in the footsteps of Unforgettable, which too was cancelled, by CBS, and then picked back up after it sought a cable slot.  Unforgettable was recently renewed.

What do you think?  Would you like to see Body Of Proof return?