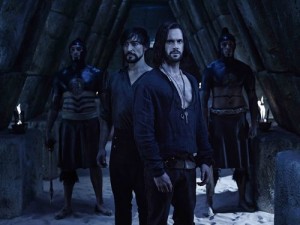 Season two of Da Vinci’s Demons finds Florence still recovering from the Pazzi conspiracy and Leonardo having to push himself in order to defend the city that he loves from a Roman invasion. There’s also still the matter of the Book of Leaves, which he left hanging in the balance when he decided to make a play at saving Lucrezia and wound up on the other side of a cannon from Count Riario. However, as he continues the search into the fate of his mother, he soon learns that Pope Sixtus might not be the only threat that could keep him from learning the truth and that there could be even greater dangers lurking in the shadows, waiting for the opportunity to strike against him.

Black Sails stars Toby Stephens as fearsome Captain Flint, who takes on a new addition to his crew in fast-talking John Silver. The band of pirates will have to accept any help they can get because New Providence Island, their criminal haven, is on the verge of extinction thanks to the rivalry between Flint and Captain Vane. Will Flint and his men be able to keep their brutal sanctuary alive while being back the threats at their lifestyle? The series also stars Zach McGowan, Jessica Parker Kennedy, and Luke Arnold.

Based on the novel series by Diana Gabaldon, Outlander tells the story of married World War II nurse Claire Randall, who finds herself mysteriously transported back to 18th century Scotland. Once there, she is forced to marry young Scottish warrior Jamie Fraser in order to protect herself, but soon enough, she begins falling for him. Claire now faces a difficult decision, in that she still loves her husband and misses her old life but wants to continue exploring her feelings for Jamie and this world that she never thought she’d be able to see. Will Claire ever return to her former place, time, and life? The series stars the likes of Caitriona Balfe, Sam Heughan, and Lotte Verbeek.

The second season of Da Vinci’s Demons is set to premiere next spring on Starz, while the series premiere of Black Sails airs this January and Outlander is currently in production for a 16-episode first season.

Will you be watching the next season of Da Vinci’s Demons? Is it encouraging that Black Sails was renewed six months before its premiere due to positive reception? How do you think the series adaptation of Outlander will compare with the novels?