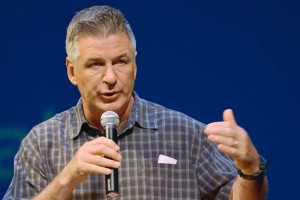 The next gig for 30 Rock actor, and the face of Capital One, Alec Baldwin?  MSNBC talk-show host.

Starting sometime in October, Baldwin will be joining the NBCUniversal cable news net as the host of Up Late with Alec Baldwin.  The show will be airing from 10PM to 11PM Eastern Time – a block that is currently devoted to docu-series.

Up Late is being billed by the network as a “current affairs and culture” talk show, and Baldwin himself has said in statements that he would likely use previous experience hosing a podcast (for New York public radio station WNYC) to drive the program.

Elsewhere in cable news: Fox News Channel has announced that it intends to move daytime anchor Megyn Kelly to primetime, though a position at 9 PM or 10 PM is unclear, while CNN is about to launch a new edition of its famous Crossfire late in the afternoon and add a second primetime hour for Anderson Cooper at 10 PM.

Up Late with Alec Baldwin will likely go up against Anderson Cooper (a popular news personality, for sure) on Friday Nights.

ABC News and Univision will also be rolling out Fusion, a news and lifestyle network aimed at Hispanics, on October 28th.

Putting Alec Baldwin in the anchor chair seems like a move to pull MSNBC further away from what we traditionally think of as cable news, as in recent months the network has been skewing more toward opinion features rather than traditional objective journalism according to Pew Research.  The strategy – whether intentional or not – has cost MSNBC ratings during big news stories such as the Boston Marathon bombing and tension in Egypt.

However, MSNBC has developed a reputation for giving non-traditional news personalities a chance, including activist Al Sharpton, who has gained a following since joining the network in 2011.  So, perhaps Baldwin can pull it off.